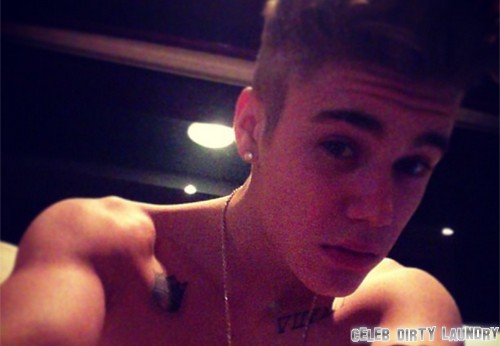 Justin Bieber just uploaded a video to Instagram that might not be the best way to get his message across. In the video, his eyes are glazed and he can’t seem to get across three words without cracking up. Basically, he was high as a kite. But why would he be stupid enough to upload a video while being that high?

Well, none of Justin’s actions have really made sense over the past year, and I get the sense that even his handlers have given up trying to help him.

Basically, he seemed to be trying to convey his excitement over the new video upload feature on Instagram.. while shirtless.

Look, we’re not saying there’s anything wrong with getting high. But when you’re posting a video of yourself to millions of impressionable teenage fans, you should A) put on a shirt, and B) try not to give them a bad example to emulate. But then again, when has Justin Bieber ever cared about something as trivial as setting examples for his fans? That thought probably doesn’t even enter his entitled head.

What do you guys think about Justin uploading a video of himself that high? There have been plenty of videos leaked where celebrities are smoking or doing drugs, but never one that the celebrity themselves uploaded. I think it’s just gotten to a point where neither Justin nor anyone around him cares anymore. I mean, it’s not like they’ve managed to stop him, even if they do care. Soon enough, he won’t really have any fans left to care, and he’ll end up being bored and jobless, which means he’ll have endless time to upload videos of himself muttering jibberish while getting high.