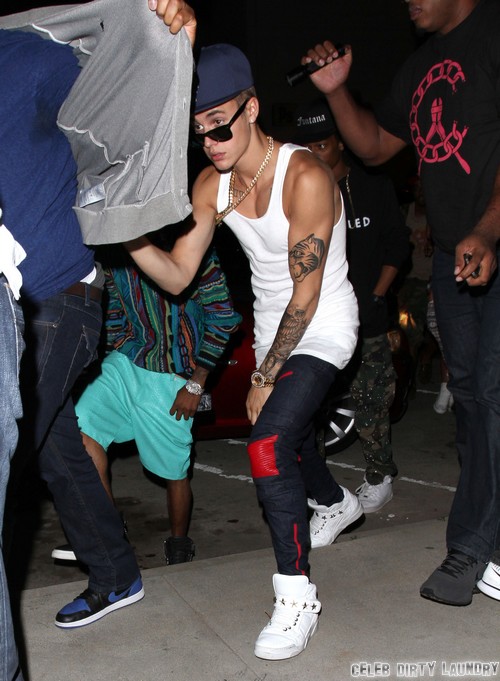 Sometimes, I wonder where Justin Bieber will be in five years, because who would have thought five years ago that Bieber would be such a laughingstock? Five years ago, he was at the top of his game, with a loyal fan base of teenage girls that would follow him anywhere. Now, One Direction has seemed to eclipse him in terms of teenage girl-fan-crazy-dom, and Justin’s been on a downward spiral of drugs, legal troubles, and partying for the better part of a year.

Now, it’s being reported by Life & Style Magazine that Justin has been indulging in some ‘risque’ hotel requests. According to the report, Justin has been calling down to the hotel desks for more condoms late at night, despite the fact that his suite already carries several condom and intimacy kits. You can’t blame the guy for wanting to have sex, but it definitely goes against his squeaky-clean image, doesn’t it? There’s also the fact that he constantly seems to be getting into fights or getting involved in hit-and-run/car chases.

Sure, some people can blame his split with Selena Gomez as the cause for this downward spiral. However, there’s a great quote that says that the day you become famous, you stop aging – and it’s never been truer than it has in the case of Justin Bieber. He got famous at 16 years, and he will forever be in the mindset of a 16-year-old. He hasn’t seemed to mature, and he’s continuously lets his fame go to his head. The friends he hangs out with are a terrible influence on him, and he’s become the pretentious douchebag that everyone either laughs at or avoids. The sad thing is, he actually has talent, but that won’t even be a factor in a few years.

Justin Bieber tries to hide behind a sweaty entourage member’s jacket as he leaves the Kanye West album listening party at Milk Studios on June 14, 2013 in Hollywood, California.