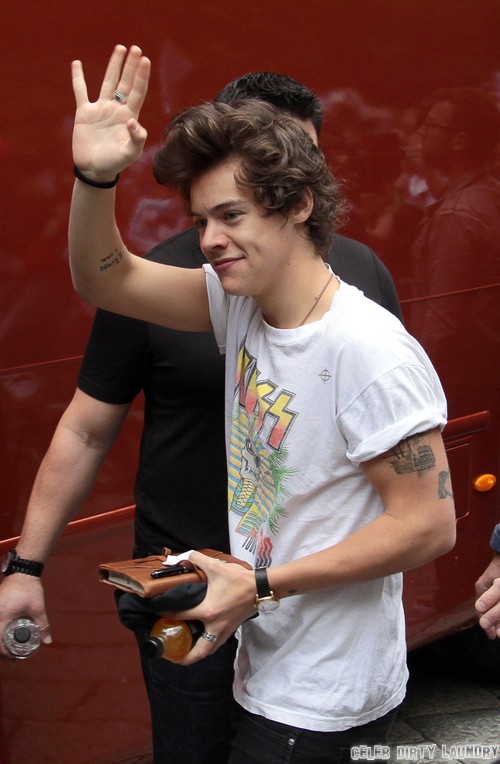 One Direction versus Justin Bieber. One Direction wins hands down, right? According to a source close to the boy band, the boys of One Direction are very happy about Justin Bieber’s ‘downward spiral’ and ‘hard-partying ways’ because it allows them a chance to capitalize on his fan base.

The source explains to Radar, “One Direction is benefitting greatly from Justin’s a**hole behavior. All of the little girls that loved Bieber don’t love him anymore because ‘he’s bad’ and they are moving on to One Direction.The parents of these young fans are resentful of Justin’s behavior and don’t think he’s a wholesome influence on their children anymore. So they’re pushing for their kids to like One Direction instead.”

The source also adds, “A lot of the girls that loved Bieber are now crushing on Harry Styles and it’s not lost on the boys of One Direction. Both them and their team is fully aware that they are gaining fans who used to love Bieber, and they know it’s the perfect time to capitalize on it and swoop in to replace him.”

We’ve been saying this for ages – if Justin didn’t get his shit together, he’d start losing his fans. He’s not the type of musician that has a fan base that transcends ages, like Britney Spears or even Taylor Swift.

With his recent behavior putting him in the headlines more than his music, it’s only a matter of time before Justin becomes a byline of the past and One Direction comes to take his spot. To be fair, 1D already has a huge fan base internationally, but if they get rid of their competition, can you imagine how much bigger it’ll get? We’ll be ushered into a whole new era of boyband mania, but I much prefer that to Bieber mania any day.