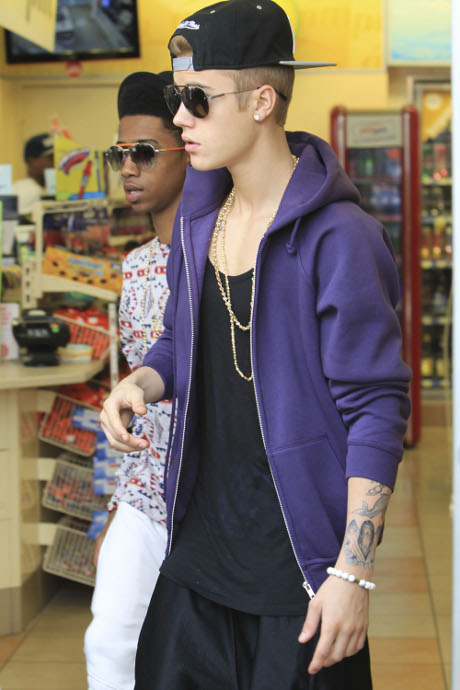 Justin Bieber is famous and infamous for many, many things, now it looks like we’ll be able to add reckless driver to that ever expanding list as well! This past weekend, Bieber was spotted speeding in his Ferrari by NFL superstar Keyshawn Johnson. Keyshawn, who was leaving a party when he spotted The Beebz, wasn’t about to let the lil’ pop star get away with his Fast & the Furious agenda — so Keyshawn hopped into his gorgeous Prius . . . . And let the great chase begin!

According to TMZ, Keyshawn followed Bieber all the way to his house, and when they arrived at the front gates Keyshawn swerved in front of Bieber’s car, blocked his way, and got out of his car to tell the lil’ dude to knock off his dangerous driving antics. Well Bieber, being tuff, tuff, tuff, got out of his car and supposedly — according to eyewitness accounts — ran into his house.

TMZ reports: We’re told Keyshawn was furious — feeling Justin could’ve killed someone — so he brought his kid home, then chased after the singer in his Prius (yes, a Prius chasing a Ferrari). When KJ got to Bieber’s pad — he blocked Justin’s Ferrari in the driveway and got out of his car to confront Justin face-to-face … but Justin ran inside of his house and refused to come out.

All this went down on Sunday night. Many people called the police. The cops later showed up to have a little chat with Bieber. Reports say that Bieber also appeared high at the time of the incident. Wow, this dude needs to chill the heck out. Where does he need to get in such a hurry? His new $400 billion mansion? Let us know what you think about Justin Bieber speeding in the comments section below.