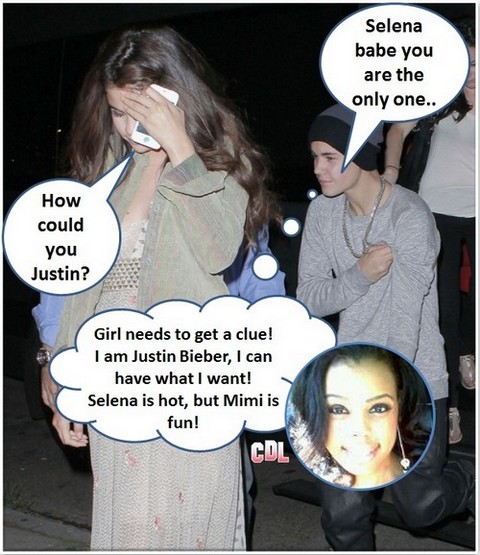 Justin Bieber’s done pining over lost love Selena Gomez. In fact he isn’t just ready to move on but instead he’s taking a few steps back and trying to make his rumored booty call a whole lot more than just a panty dropper. Justin supposedly first hooked up with Milyn “Mimi” Jensen at the Four Seasons hotel on Dec. 21. The two reportedly shared a blunt or two and then headed off to Justin’s private suite for some real fun.

At the time Justin was still technically with Selena and the fling contributed to their final split. Now that Justin has had nearly a month on his own he’s finished even thinking about Selena because he wants another shot at Mimi. According to Radar Online he actually tried to hook up with her last night but got nowhere fast. Mimi was flying to Miami to begin filming Season 11 of the Bad Girls Club.

Yep, that’s right Justin has picked himself a real winner to rebound with. If you’ve seen 5 minutes of Bad Girls Club then you know as well as I do nothing classy comes from that set so Mimi must be a real trashbag and that, is Justin’s style right now.  He’s not looking for a real partner with a shred of class. If he’d wanted that he’d still be with Selena!

Instead he wants the bad girl just as much as he welcomes getting in trouble for smoking weed. He likes to fly in the face of any rules and he loves that rush of rebellion. We’ll see how much longer he has a career if he keeps on this path. As it stands now Justin is well on his way to becoming the male equivalent of Lindsay Lohan!

Are you surprised Justin has his sights set on a bad girl? Tell us in the comments below!