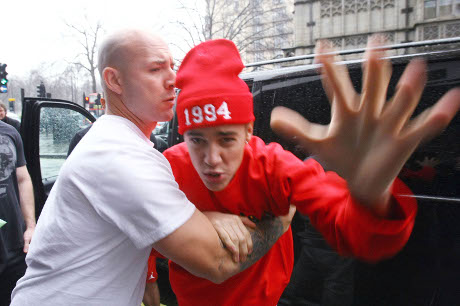 Justin Bieber definitely has a temper and recently this little crazy totally went off on a photographer. Justin Bieber allegedly made contact with the paparazzo in a mad rush to his SUV from his Central London hotel and it wasn’t long before the photographer (equally as crazy, I’m sure) went off on the lil’ dude claiming that he was physically assaulted. *sigh*. What do these photographers expect when they’re practically falling over celebs? I’m not sure how “physical” Bieber got with the pap, but I’m assuming it was enough to get him all riled up. The photog began cussing Bieber out.

But just because Bieber fainted on stage the other night doesn’t mean he’s not feeling well enough to fire back at the cussing Brit. The pap allegedly screamed obscenities at The Bieber — things to the tune of: “f**k off back to America”, “f**king little moron.” and Bieber popped his lil’ Bieber head out of the window trying to be a bulldog and said, “What the f**k you say?”

“I’ll f**king beat the f**k out of you.” Bieber’s last words before he tried to swing his lil’ Bieber fist at the photog. Luckily, his bodyguards stepped in between him and the incident. Probably a good thing. Bieber doesn’t need any legal trouble.

The SUV eventually drove off and Bieber recently tweeted: “Ahhhhh! Rough morning. Trying to feel better for this show tonight but let the paps get the best of me.”

I guess this just further cements Selena Gomez’s recent decision to look for a maturer man after realizing Justin’s childish ways and outlandish, bad boy behavior was getting a bit out of hand. Where do you think Bieber is headed? Do you think he’s headed down a dark road toward badboy-dom? He seems to be spiraling out of control. He better get his crap together!