Justin Bieber Spits In Woman’s Drink At Gym Like A Spoiled, Roidy Punk 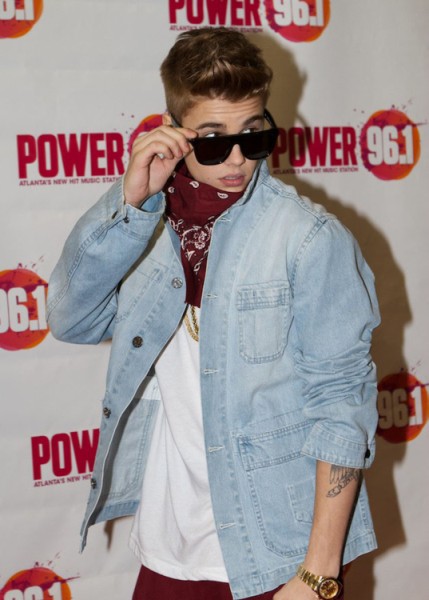 I get to write about Justin Bieber twice in two days. Lucky me! Not really because he’s displaying some serious douchery and it’s so annoying that more people aren’t calling him out for it. So let’s do a quick recap. Bieber was at the Ritz-Carlton gym in North Carolina on Tuesday because he had a concert or something over there. We know this because radio host Collete Harrington was also in the gym when Bieber showed up with two other people, including his trainer.

Harrington asked for a pic and he said no. Fine. That’s his prerogative.

But then things got straight up middle school. Apparently Harrington likes to count her reps out loud. That sounds annoying but that’s also her prerogative. But Justin and his sideshow weren’t having it. According to TMZ, she said they started mocking her and Bieber’s friend told her to “Shut the F-ck up.” Harrington ignored the losers but they didn’t like that one bit and decided to let her know it. Harrington alleges Bieber, or one of his friends, spit blue Gatorade in her water bottle when she wasn’t looking (she even took a pic of it as evidence). Unfortunately for her, she took a swig without looking. Gross. She filed a complaint with the hotel but naturally Bieber’s camp is saying that none of this happened.

Of course they are! There’s no such thing as accountability for Justin Bieber. Gym etiquette be damned! Justin can tool around with anyone because he’s Justin Bieber. How many religious tattoos does he have at that moment? A few, right? Jesus doesn’t talk to me or anything but I’m pretty sure he wouldn’t spit in someone’s drink OR condone it. Because that’s going to be the defense, right? Justin didn’t spit in her drink! Someone else did! But he knew it was going on. He probably egged it on since he’s a punk who doesn’t want to get his hands dirty. Such a douche. And still demonstrating those post-Selena Gomez, anger management, roidy issues.

But it all could be false info, right? This woman could be making the whole thing up. Justin could be innocent. You know who also cries innocent a lot? Lindsay Lohan. Just saying….

Do you think Justin Bieber spit in that woman’s drink? Is your day ruined?