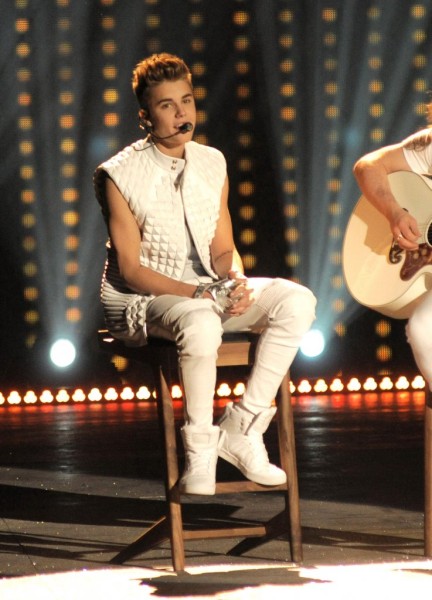 Is Justin Bieber a beast? He’s been sportin’ some massive guns lately and biting at the bit to show every chick within a block radius where the weight room is but could Justin’s newly buff physique be the result of steroids?

Let’s have fun with this and look at his recent b-tchy behavior. Steroids have been known to increase mood swings and sexual arousal (I’m no expert. That brilliant research came from Wikipedia). But Justin’s attitude has been all over the place lately. It was only a few months ago Justin went all psycho on some paparazzo outside a movie theater with Selena Gomez. Anger problems! AND his relationship with Selena has been so up and down with accounts of constant bickering. He basically has the temperament of a thirteen-year-old girl. So check on the moodiness!

What about the sexual aspect? He was all about that Victoria’s Secret fashion show which may or may not have resulted in his initial split with Selena. THEN we heard he was hooking up with Selena look-alikes after concerts while he whined and impatiently waited for her to take him back. Yes, I understand that he’s a 18-year-old boy that never hears the word no and has access to hot women at every turn, but that’s besides the point! Check on heightened sexuality!

So done and done. AND he was caught training with Mike Tyson before his paparazzi beat down. I wouldn’t be surprised if he picked up some bulking tips at the gym. So are you a belieber with the anabolic steroids? Justin Bieber is a skinny dude hell bent on convincing the world he’s a man. I could see him taking something to speed up the growing process. But, as you can tell, I’ve got no evidence here. It just seems like a b-tch thing to do and Justin’s recent crotchity behavior labels him a little b-tch in my eyes until he ever makes a song I like or his voice deepens – whichever happens first.

Do you think Justin Bieber’s muscles are the result of juicing or is he just acting like any other spoiled teenage kid?