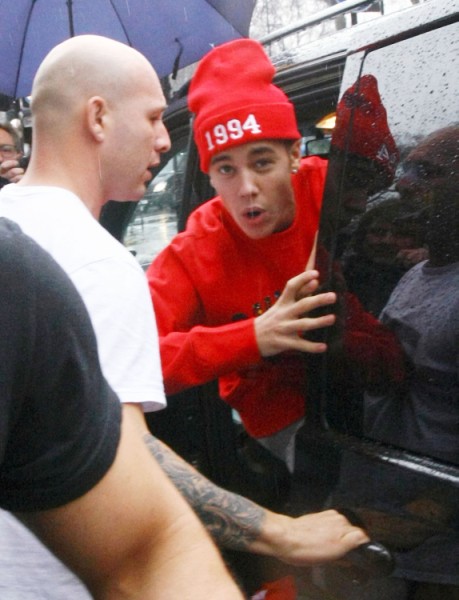 He’s still a teenager so his latest dramatic blow up makes perfect sense. Why not vow never to return to a place for the rest of your life? It’s only Britain anyway. It’s not like it’s historically/culturally significant or anything. Who cares about London? Justin Bieber’s tantrums are the center of the world now and are quite possibly ruining his career.

After a week filled with late concerts, negative backlash, health scares and paparazzi fights, Justin’s people are rallying to keep him afloat after he canceled a TV appearance in London and allegedly said he was never returning to Britain. The magic paycheck can’t quit, can it? News has spread that his mom will be joining him on tour soon because she, along with the record label, are worried about his mental health. Why can’t he just play nice, keep singing and make them more money? Apparently even Will Smith is in on the intervention too. Will’s son, Jaden Smith, is one of the supporting acts for the tour so he’s been mentoring Justin through this tough time and encouraging him to stay away from new friends,  Lil Twist and Lil Za, because they are the source of all of Justin’s problems. Right, because Justin’s spoiled upbringing and celebrity has nothing to do with his recent bad decisions?

Screw Will Smith. They need to call in the big dogs. They need Selena Gomez. She’s the only one who’ll be able to put a muzzle on that kid again. He’s having a full blown meltdown. Haven’t the record agencies learned anything since Britney Spears? If a child star is imploding you don’t give the microphone and tell them to keep going. You have them stop and relax for awhile! His schedule is obviously too much for him to handle right now. Do they actually think the media attention is going to stop? Because it won’t. The paparazzi are going to keep at the kid because meltdown pics are big money. But so are Justin’s concerts so I guess the agencies have no incentive to slow him down. This isn’t going to be pretty people.

Are you surprised by Justin Bieber’s vows? If you were having a shitty week wouldn’t you just blame a part of the world?