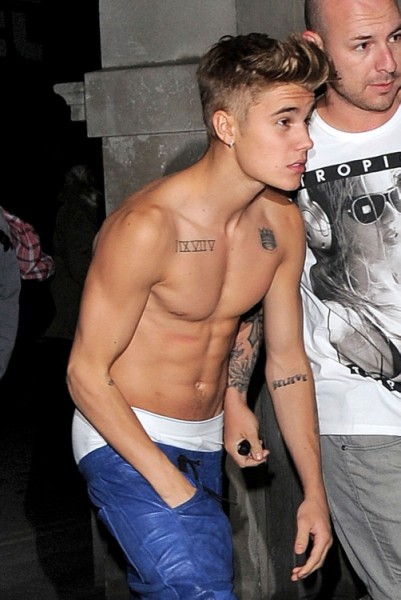 Yesterday I posted a story about Selena Gomez ripping on Justin Bieber’s rippable fashion choices. She wasn’t the only one. We were all doing it and it was awesome while it lasted. But it seems the “Selena Gomez embarrassed” headlines might have made an impression on the young, highly impressionable pop star. After his concert in London yesterday, Bieber was spotted walking the streets shirtless on his way back to his hotel. Was this a response to Selena’s jibes or was Bieber just overly heated on this London winter night?

Why do we bother with all the questions? Let’s just do exactly what he wants and stare at his bulked up monster frame! Mike Tyson is so proud right now! But can someone please call Bieber and tell him he’s not a rapper from the early ’90s. Yesterday he had a fashion crisis from the ’80s and now he thinks he’s Vanilla Ice. I would much rather be Donny Wahlberg. At least he has parlayed his boy band popularity into a semi-successful acting career on the small screen. Vanilla Ice is… still Vanilla Ice.

So if this Justin Bieber shirtless moment is a response to Selena should she be eating her words? I doubt it. There ain’t nothing there she can’t get somewhere else. Trust. If anything I’d say he just nailed his coffin on that relationship. If Selena was embarrassed yesterday she’s probably hysterical today. Clearly Bieber is surrounded by yes men. How do you think this conversation went down? “Hey guys I’m going to get out of the limo without my shit on. That’s cool right? Right? I mean, people will think that’s bad ass, right? Why work out if you can’t show it off, right? Right?”

“Exactly Justin! You’re the man! Your pecks are amazing right now! Do it!”

Too many sycophants equal bad things.

Justin Bieber celebrated his 19th birthday last night as well. He put his shirt back on for that though. How many tattoos will Justin get this year? I’m guessing he’s going to have a sleeve done. Mark my words!