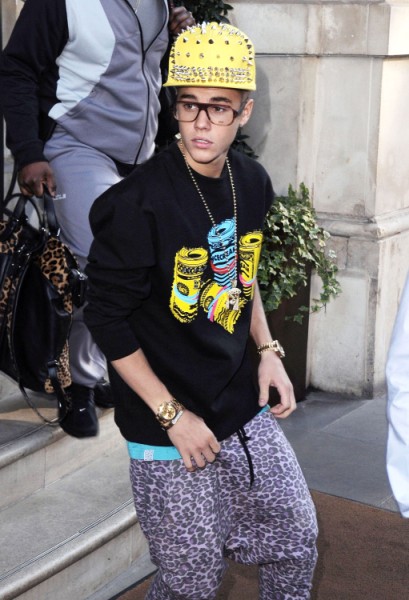 I don’t care how rich and famous you are, dressing like a New Kid on the Block when you’re not a New Kid on the Block or going to ’80s costume party isn’t doing anybody any good – especially yourself. Who the hell is dressing Justin Bieber these days and don’t tell me he came up with this himself. This pastel creation reeks of stylists who think they’re ahead of the trend. But come on! Purple animal print pants? Who wears pastels when they’re trying to win their ex-girlfriend back? I suppose Bieber does but thank the Lord it’s not working.

According to Hollywood Life, a source said: “She [Selena Gomez] hasn’t laughed harder in a very long time. She was embarrassed for him.”

Finally! I usually just shower this girl with ambivalence but I might be starting to like her. But, seriously, she has to be treated with kid gloves if she’s just now realizing that Justin Bieber should always be laughed at.

Justin Bieber’s fashion choices are only adding fuel to my theory that he is the Britney Spears in the Justin Bieber/Selena Gomez break up saga. Post-split Selena’s been out promoting Spring Breakers, hanging with her girlfriends and showing tasteful side boob. She’s coming across pretty mature and actually kinda hot which has surprised me. It’s a solid game plan and she’s working it well. No tears. No Taylor Swift cryptic sad sack tweets. I’m impressed. Bieber, on the other hand, is a straight up mess. He’s been rumored to be sleeping around with randoms (check for Britney); wearing some interesting ensembles (check check for Britney); and looking all sorts of confused and lost (check check check). Wouldn’t you be embarrassed? Selena Gomez dodged a bullet on that one. If she didn’t pull the plug sooner or later she would have found herself alongside him wearing matching denim and who needs to see that again?