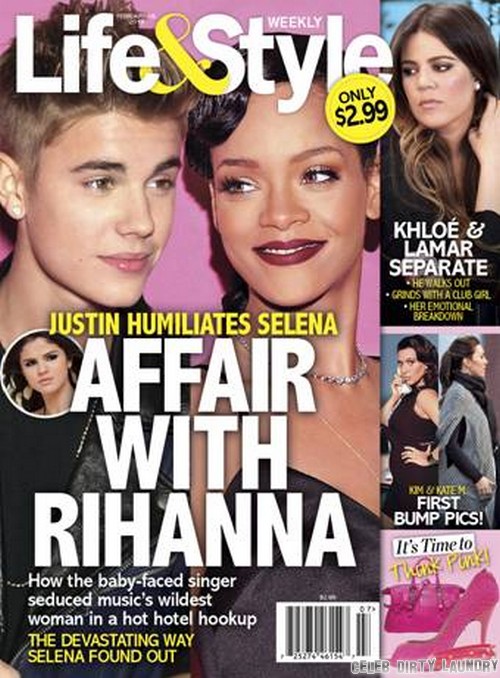 In a shocking twist, teen singer Justin Bieber appears on the cover of the latest issue of Life & Style Weekly with R&B singer Rihanna. The tabloid reports that Justin and RiRi had an affair! Say what?!?!!

According to the report, Selena had just learned that Justin was cheating on her with Rihanna during the early stages of their relationship. So, she did what any normal teenage girl would do, she ditched him as soon as she found out! Can you blame her?!?

A pal of Selena’s said, “It has devastated her. It really cut like a knife because it happened in February of 2011, when Selena and Justin had been dating for months and were falling in love. It’s caused Selena to question their entire relationship.”

The pal said that Justin and Rihanna were flirting at a basketball game in Los Angeles on February 20, 2011. It was at that time that they did the dirty! The pal said, “Selena thinks maybe they’ve been hooking up all along.”

The snitch said that they spent some time together while the Victoria’s Secret Fashion Show was going down in November 2012. The pal revealed to the magazine, “During breaks, they’d sneak away to the Hotel Giraffe. They were alone – their security made sure of it. Hotel staff blocked off the entire floor for them.”

Justin’s rep has denied that there has been any hooking up between the pair, but the friend said that it’s likely that he’ll never ‘fess up. The friend added, “Justin would never admit to it; he would never tell anyone he messed around with Rihanna.”