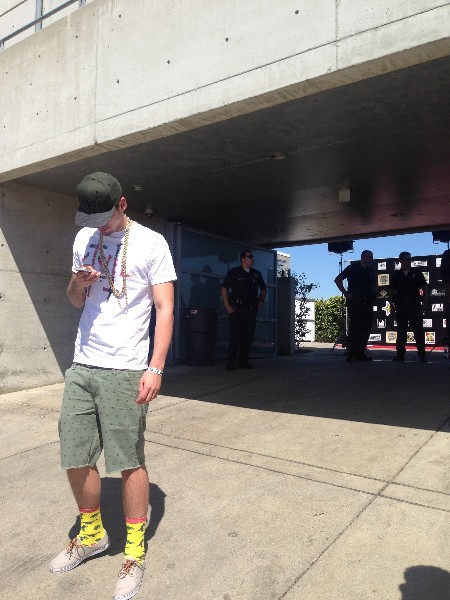 Justin Bieber’s friends continue to make headlines as it’s learned that rapper, King Kevi, was one of the major reasons Snoop Dogg’s 4/20 party was shut down prematurely over the weekend.

TMZ initially reported that the festivities were cut short at 11 a.m. Saturday morning when neighbors complained of the parking problems and exorbitant noise coming from Snoop’s place and cops were called in. Snoop got there just in time to deal with the police but he couldn’t stop them from putting a kibosh on the day.

But now we have someone we can point the finger at! According to King Kevi’s camp, he was behind all the ruckus. Apparently Kevi likes to go berserk at parties and caused a major issue at Snoop’s. I’m not sure what he did exactly but it was enough to piss off  the neighbors so I guess we can use our imaginations. And this wasn’t the first time. He’s known for this charming behavior. He’s also ruined a few parties at Justin’s house for doing the same thing. Can we assume he won’t be invited back next year? I can bet Snoop would be cool with you ruining Christmas, maybe even Thanksgiving, but if you ruin a a 4/20 party you’ve got to be out of the circle of trust FOREVER.

How is this kid still in Justin Bieber’s circle of trust anyway? Didn’t he try to get with Selena Gomez after the two broke up? There were all these photos of Kevi pulling up at her house and he got a lot of hate for allegedly trying to come between a reconciliation. Too bad it didn’t work! We all know who’s together again! He should try harder next time.

What do you think? Should King Kevi be forgiven or is ruining a Snoop Dogg 4/20 party an unconscionable offense?