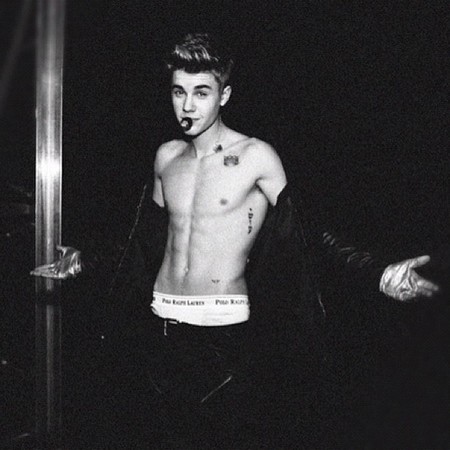 Justin Bieber wants Selena Gomez to know she can kiss his ass. The ‘Baby’ singer posted a picture of himself on Instagram just weeks after Selena ended their two-year relationship once she found out her beau was getting hooked on smoking weed. It has been back and forth with these two – one minute they are together and the next they are arguing and constantly breaking up – but once Selena sees this pic, she’ll realize how immature her ex-boyfriend really is.

While we’re used to seeing Rihanna getting naked on Twitter and Instagram all the time, it was a little less expected from Bieber, considering he has such a huge fanbase (who were probably loving the sight of his butt cheeks). Bieber had posted the picture but it didn’t take long for him to realize how childish he was being and decided to remove it, but by then, it had already gone viral with 90,000 likes in less than an hour. He later tweeted to his 32 million followers: “Haha”. Seems like he found it pret-ty amusing to show his bum to the world, but we wonder how Selena will respond to this picture.

Or maybe he was just showing off his butt to all the haters who never thought he could make it in the film industry. Yes, it has been announced that Justin will soon be starring in a movie alongside Mark Wahlberg for a basketball-focused motion picture. The actor confirmed that Paramount loved the idea so much that they contacted Justin’s team who gave the thumbs up for the project: “We were at Paramount pitching a different movie and we had the meeting and I said, ‘Hey, by the way what do you think about me and Justin Bieber in a like Color of Money-type of basketball, street hustler movie?’ They bought it in the room in five seconds. So we developed the script, the studio loves it, his camp loves it.”

So, not only did Justin cause some controversy with his butt cheeks, he has also landed a new movie role. He still hasn’t got a girlfriend though. You can’t have everything in life, right? Ha! We love Selena because it’s clear that she doesn’t care about how much money the Biebs has in his pockets, she just wants someone who will love her and treat her right. Hey – how about you give us a call? Should she get back at her ex by showing off her breast? YES, PLEASE!!