Was Kanye West Arrested For Vicious Beating Attack on Photographer? – Paramedics On The Scene (VIDEO – PHOTOS) 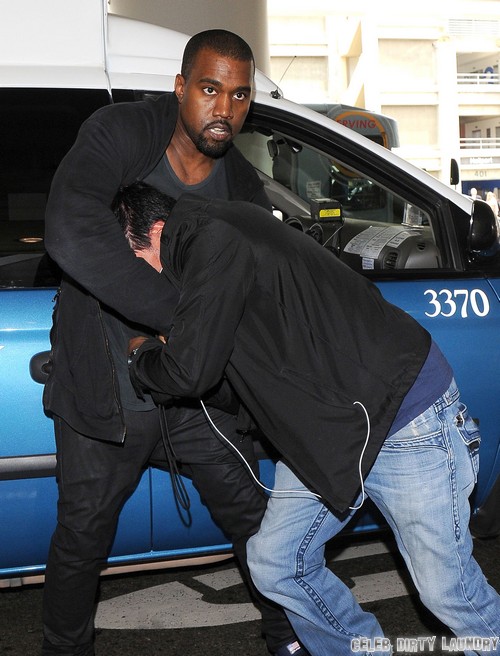 Kanye West has lost his mind. His second paparazzi attack within days has left the photographer in so much pain that paramedics had to be called. There’s little chance that Kanye will be able to escape this situation unscathed.

According to TMZ, there were a group of paparazzi that surrounded Kanye as soon as he left the airport, and one pap was apparently particularly ‘aggressive’ and ‘probed Kanye with tons of questions’.

Although Kanye told the man to stop asking questions, the man ignored him – as paparazzi generally do. Kanye then lost his cool and started throwing punches at the pap. Cops and paramedics were called to the scene, and Kanye is apparently ‘nowhere to be seen’.

That seems odd. Considering that he just attacked and bloodied [allegedly] another person, you’d think the cops would want to try to talk to him. I assume that as soon as he saw what he’d done, Kanye ran out of there and lawyered up. That’s what I would do if I was him, because he’s not going to get away so easily this time. Considering his history of aggression with the paparazzi and the fact that actual paramedics had to be called this time, there’s a high chance that the charges against Kanye will stick. Unless the pap decides not to press charges for some weird reason, which I don’t see happening.

What do you guys think about Kanye’s attack on the pap? He clearly has anger management issues, and he needs to learn to control them. And I’m never one to defend the paparazzi, but Kanye should be arrested for beating up another man. Just because he’s a celebrity doesn’t mean he deserves special treatment. Let us know what you think in the comments.

Kanye West fights with a photographer at LAX airport in Los Angeles, California today, July 19,after arriving on a flight.