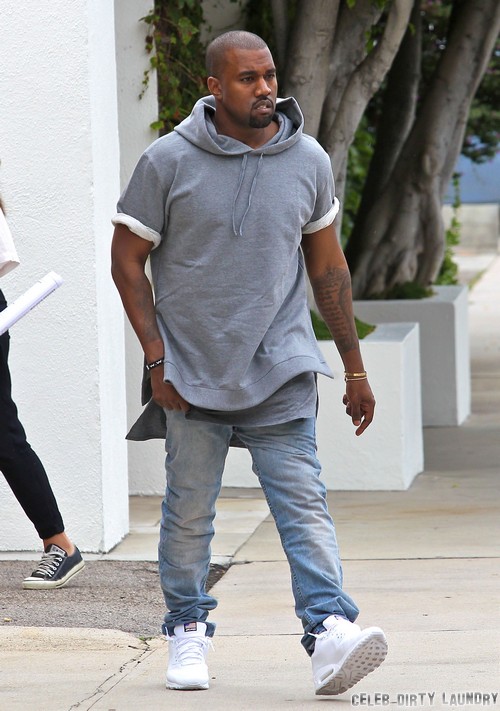 Kanye West is thought by some to be a mega talented hip hop rapper, and music producer, but his ego tends to outweigh his better judgment. After his public claims of George Bush not liking black people, interrupting Taylor Swift’s award speech, and having a picture of his cock leaked online, you’d think he would just sit his Quagmire face down somewhere.

Instead of basking in the glow of new fatherhood, Kanye West arrived at LAX airport and started another rumble with a paparazzo. All the guy did was compliment Yeezus on his new music, but before he could even finish, Kanye Kardashian manhandled the camera ,and started shouting demands

“Don’t talk … don’t talk to me … I don’t won’t to hear paparazzi talk to me or anybody I know … and tell everybody never talk to anyone that anyone knows … don’t talk to themselves .. DON’T TALK EVER AGAIN.” The daring paparazzo, hoping for a reaction, continued the compliments and urged the narcissist to release Watch the Throne 2 (his collaboration with pretend brother, Jay-Z). That’s when West went AWOL, and tried to break the camera. How dare the camera man question “a God.” Kanye was previously arrested in 2008, for the exact same thing, but clearly hasn’t learned from his mistakes.

Lamar Odom was blasted recently in a cheating scandal, and it caused him to war against photographers hoping for his honest reaction. Lamar trashed their expensive equipment before speeding off with his guilty conscious. Maybe this incident is what fueled West, but hey Kanye, this is the same America where Elton John can adopt little boys. Yeezus forgot that anyone has a right to talk to him – or maybe he thinks a special set of laws applies to him – and that HE gets to make those laws – and he gets to make them extemporaneously!  Yeah, he certainly behaves like an entitled a**hole.

How dare he have a baby with a fame sucking Kardashian, without embracing the media spotlight? The Kardashians are married to this game. Kris Jenner is the one who masterminded the whole thing, just like she negotiated Kim’s infamous sex tape. Did Kim not explain the details of their contract?

Let’s hope North West is taught to tweet her whereabouts, then act angry when paparazzi swarm her like her doting parents. One thing is for sure, she’ll likely look great in her Instagram bikini selfies, but have a piss poor attitude.

Kanye West does some furntiture shopping in Beverly Hills on July 11.