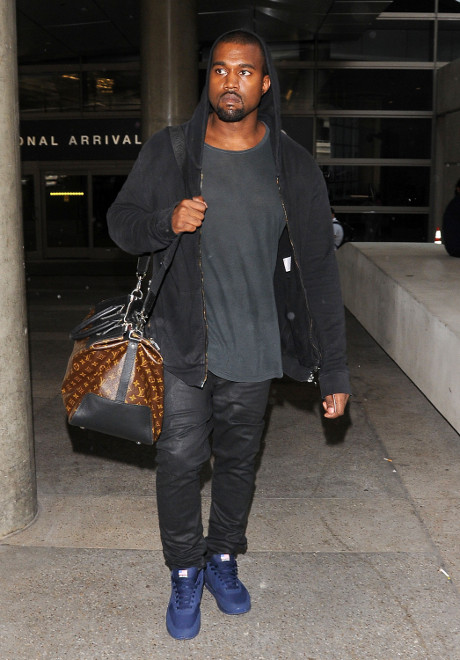 Kanye West is still feuding with Kris Jenner, and the never ending drama continues to fester, according to National Enquirer. The magazine is saying the latest feud occurred when Kris walked on stage on her talk show with decoy baby North West. A source told National Enquirer “He just kept ranting, ‘all Kris cares about is her damn ratings — she never stops promoting!’”

It’s easy to believe these two constantly fight. She is a famewhore who only loves money and likes to have tight control of her clients (family). He is a hot head with a temper that is triggered very easily unless he has his way 100% of the time. Is the story true? A supposed source told Gossip Cop this story is completely false.

I have a hard time believing this story is false. There have been many reports of Kanye and the Calabasas Dictator clashing. One of the fights centered around Kanyne not wanting to appear on Kris’ reality show Keeping Up with the Kardashians. Kris’s daughter (and Kanye’s baby mama) Kim Kardashian is the nucleus of the show. The momager expects Kanye to participate in filming because he is dating her daughter, and his appearance would increase ratings. Kanye wants nothing to do with reality television.

The other issue that keeps these two in a state of animosity is Kris’ constant meddling in Kanye and Kim’s relationship. Kanye has talked about moving to Paris with Kim and their daughter, North. It’s been reported Kim is in a tug of war with her mother and her baby daddy. Kris wants to keep a tight rein on Kim and the baby by trying to force them to stay near her in Los Angeles. Kanye wants to take his new family far away the Kardashian/Jenner family and their money making machine. If the Calabasas Dictator allows her #1 meal ticket to leave her Kris will be left without a partner in crime.

In a recent appearance on the talk show The Talk Kris defended Kanye’s violent action against a paparazzi who was trying to compliment him. She said Kanye was sleep deprived due to caring for his new baby. Kris also talked in circles saying she didn’t know what happened with Kanye 15 minutes before the infamous video was shot at LAX.

She did not want to judge Kanye’s actions when she didn’t have all the information. I think Kris was on the defensive. She knows if she angered Kanye with her answer she would be in for another exchange of nasty words with this big baby. Kris is putting on a front that her and Kanye are the best of friends.

What do you think about this situation? Let us know in the comments section below!