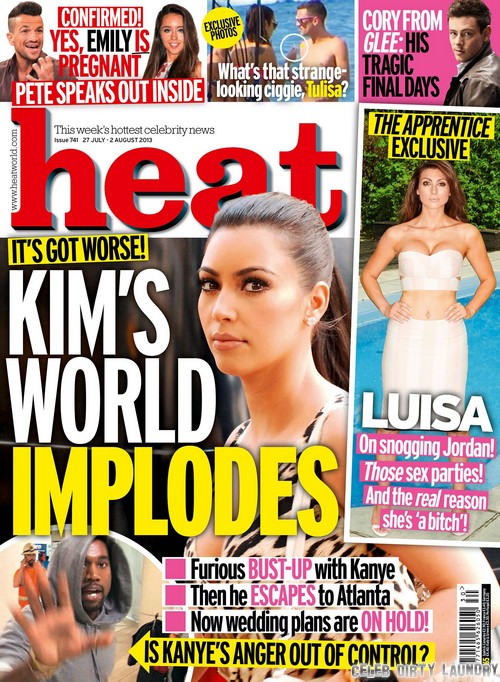 According to the new cover issue of Heat Magazine, Kim Kardashian’s relationship to Kanye West is about to ‘implode’. The captions on the cover read, ‘Furious Bust Up With Kanye’, ‘Then He Escapes To Atlanta’, ‘Now Wedding Plans On Hold’. Finally, ‘Is Kanye’s Anger Out Of Control?’

Well, we know Kanye’s anger is out of control after we saw him beat down the paparazzi at the airport. Since this is not the first time he’s let his temper get the better of him, I actually have to wonder what goes on when he and Kim gets into fights. It’s definitely true that it’s a bit odd that Kanye is already travelling after little North West’s birth, but I don’t think they ever had wedding plans to be put on hold. All the sources close to Kim and Kanye had always said that Kanye was against getting married, at least right now.

Heat also has an exclusive interview with Apprentice star Louisa, who discusses ‘snogging Jordan’, ‘those sex parties’, and ‘the real reason she’s a bitch!’ Well, that should be interesting.

There’s also an exclusive on Peter Andre and Emily MacDonagh’s upcoming child, with Peter reportedly confirming Emily’s pregnancy. There are also exclusive photos of Tulisa smoking a strange looking ciggie, which we can bet is not actually a ‘ciggie’.