Kanye West Threatens SNL: “If You Make Fun of Kim Kardashian I Quit!” 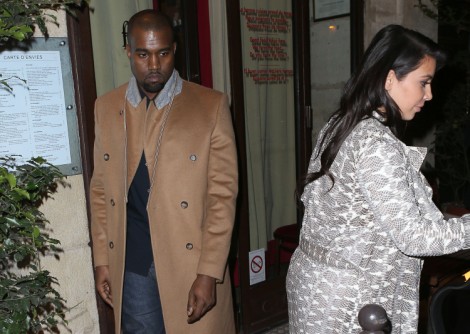 Saturday Night Live has lined up Kayne West to perform on the show’s season 38 finale. The whinny rapper is reportedly nervous that SNL’s funny sketches will make fun of pregnant Kim Kardashian!

Who cares! They both should get what they deserve and if they do not want their lives made fun of then stay off TV. The only reason Kayne agreed to this performance was to promote his upcoming 6th solo album. Face it Kayne, your girlfriend, Kim Kardashian, is used to people making fun of her.  And Kayne, you should be too. Saturday Night Live is known for making fun of Kim and her family which is not hard to do since the material is always provided by the Kardashians themselves.

Kayne were you nervous or embarrassed went you infamously declared on the televised Concert for Hurricane Relief, “George Bush doesn’t care about black people,” blaming him for the reason that America helps “the less well-off as slow as possible.” Hey Kanye, what have you done lately for “black people?“

Kanye how about when you stormed the stage at the MTV Video Music Awards just after the Best Female Video Award, was presented to Taylor Swift and cut the teen singer off, grabbing the mic and protesting in support of Beyoncé. “I’m sorry, but Beyoncé had one of the best videos of all time,”
This is yet another pathetic cry to engage sympathy from America for Kim Kardashian when no one likes her or her family anyway.

PLEASE! I say Saturday Night Live should not change their format of hard-biting comedy sketches and continue on with the show as planned. Let’s face it, Kayne might be reportedly nervous about sketches with Kim but his BIG EGO will not stop him from promoting his album. Kim Kadashian be damned when it comes to KAYNE’s EGO, SUCCESS, and FAME.

“The writers don’t want to piss off Kanye so they’re prepared not to cross the line, but they will go as far as they can,” a source explains. “The writers are pushing real hard for an over-the-top skit and the producers are there to reel them right back in if they go too far.”

There’s no release date set for Ye’s album, but I am sure we will hear a single that’s timed with this SNL performance. Please share your thoughts on this being a publicity stunt for Kayne? Who thinks Kayne will not appear knowing he has a new album coming out? Who feels Kim and Kanye really need to go have a seat and shut up? Share your thoughts!!!