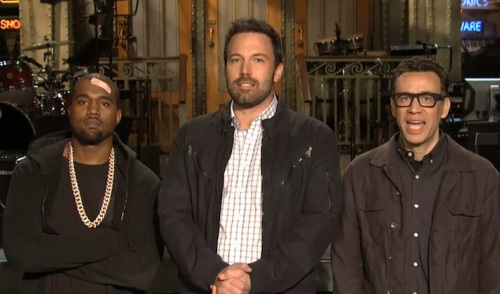 Well, this ought to be interesting. Tonight marks the season finale of Saturday Night Live and Ben Affleck and Kanye West will be the guest stars. Both men are knee deep in rumors and innuendo about their private lives so it’ll be interesting to see what SNL does to them, I mean with them. Ben, even months after that notorious Oscar speech is still under heavy criticism regarding his marriage to Jennifer Garner. He hinted that they have some issues and well, marriage is work! If you listen to the tabloids they are on the verge of a major collapse because Jen doesn’t trust him and is sick of being left alone in the dust to raise three kids usually alone.

Then there’s Kanye. I would normally say that this guy has zero sense of humor and when performing at the Roseland Ballroom recently Kanye ranted about SNL saying,

“Somebody asked me, ‘When you do SNL, is you going to do a skit about the paparazzi and sh*t? And humanize yourself? I ain’t here to apologize to no motherf*ers, man… I ain’t runnin’ for office.”

The thing is, in the clip pimping tonight’s show, Kanye begins it with a big ole’ band aid on his head where he walked smack into that sign in Beverly Hills earlier this week. By the second frame the plaster is gone, but the whole thing does hint at the possibility of Kanye being able to laugh at himself, just a little. Now, will SNL take a clear and easy shot at Kanye and his blimpified baby mama, Kim Kardashian? That is the real question and probably what many viewers will tune in for tonight!

Will you be watching Kanye and Ben tonight on SNL? Celeb Dirty Laundry will have all the (possibly) hilarious videos from the show.  Check back with us later.  Meanwhile here is a sample of what we can expect.

NOTE: VIDEO BELOW IS NSFW FOR LANGUAGE