Kate Gosselin Intends To Continue To Pimp Her Children For A Living On New Reality TV Show: Cries She Has No “Steady Income” (PHOTO) 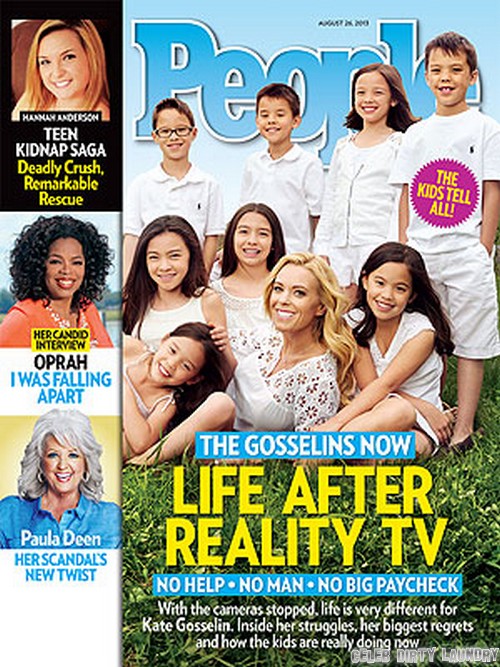 It’s tough when you are a single mom to eight growing kids and lack a steady job. At least that is what Kate Gosselin is telling us these days and my guess is that a tiny part of her must miss being married and the driving force behind a reality show that totally made bank for years. Kate and her kids are gracing the new cover of People Magazine (which ironically enough will generate some fast cash for her) talking about how her diva behavior ultimately hurt her earning potential in Hollywood. She believes that the way she carried herself through her divorce ultimately led to her fans scattering like Cheerios.

Here’s the thing, Kate has made a mountain of cash over the last decade so why didn’t she do something to ensure that she would have a real job after her reality star dropped? No one stays famous for just being, at least not for very long, and Kate is smart enough to have known that. She could have taken herself back to school for anything she pleased and could be earning a real living and setting a good example for her kids now.

Instead this cover with Kate proclaiming to be a changed person makes me think it’s just another angle for another reality project. Ya know – ‘I’ve changed come follow us now so I can show the world I’m more grounded‘ – that type of thing. Kate has never been one to do publicity for nothing so what do you think that she has up her sleeve next? Tell us your thoughts in the comments below!