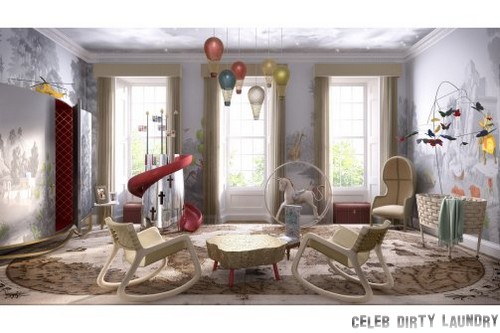 Prince Harry has arrived in the US. Considering that the last time he was here, he ended up naked in Las Vegas, we can only hope that he decides to revisit the City of Light (and much darkness). However, in non-Harry royal news, expert interior designers have managed to make their best and most educated guess about what Kate Middleton’s royal nursery will look like in Kensington Palace.

They used images of previous royal nurseries, and took into account the dimensions and the number of windows at Kensington Palace.

One of the designers spoke about his version of the nursery, saying, “The design is inspired by Jules Verne’s Around the World in 80 Days. The silk rug on the floor is an 18th Century map of the globe. The pendant light is a flotilla of hot air balloons hand blown in glass. The steamer trunks under the windows are for storing toys and for dressing up clothes. The slide wraps around the castle like an old helter skelter and the castle is a play den with turret. The rocking horse is actually a unicorn. The rocking chairs and cot are also made in oak by craftsmen, with the feet of the cot  adorned with acorns, the greatest oaks have been little acorns.”

Wow, talk about overkill. Although I guess there’s no such thing as ‘too much’ when you’re talking about royals. To be honest, the whole thing just seems like an audition to design the nursery themselves. To be fair, they did a fantastic job. However, smart money’s on the nursery already being designed and ready for the eventual birth of the royal heir. 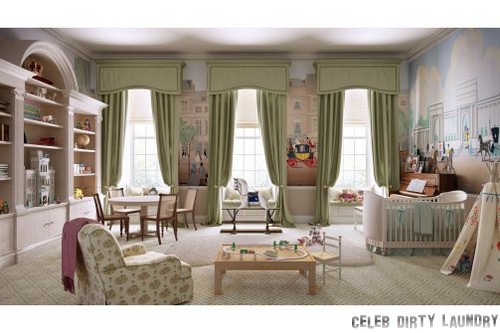