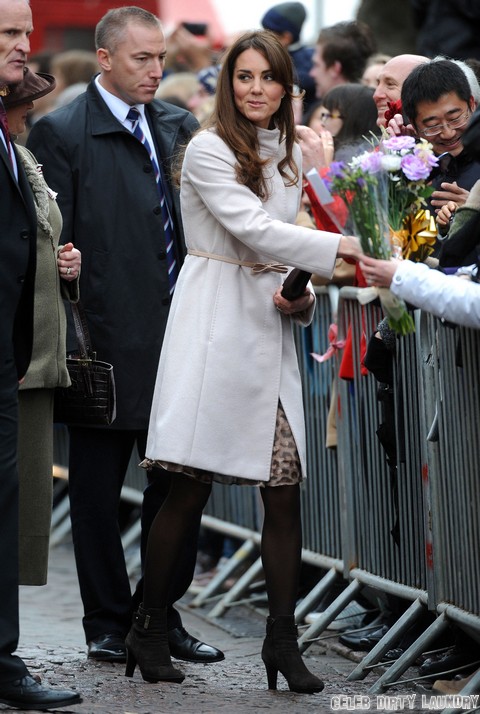 Was Kate Middleton the target of a knife-wielding crazed man at Buckingham Palace? A man, supposedly mentally ill, had been looking for someone in the royal family when he tried to get into the Buckingham Palace with two knives in his hand. Though Queen Elizabeth and Prince Philip, who live in the London-based mansion, were out at Sandringham at the time the incident went down, onlookers were watching in horror as the man was tasered to the floor by the police who said he could have been a threat to the public.

The unidentified man, believed to be in his 50s, was not threatening anyone until he was approached by the cops at the Buckingham Palace gate. He “challenged” the cops as he pulled out two knives; placing one to his throat while the other stayed firmly in his hand. A video of the man being tasered by the British police has since been posted on YouTube where you can clearly see the man being approached by security, and it didn’t take long for them to make a move on him and take him down.

Though we wish to have been there ourselves (seeing that we only live a couple of minutes away from the Royal Palace) we would have probably been told to “MOVE NOW” as the annoying policewoman shouts in the video. Um.. hold up! If I was a tourist and I came the Buckingham Palace to snap some pics, nobody would tell me to clear the area. How dare she!?

Anyway, the Metropolitan Police have since said: “It was approximately 11.50. A man was seen outside the centre gate in possession of two knives. He was not making threats to members of the public but he was challenged by police. He acted aggressively and a Taser was discharged. He is thought to be in his fifties. He was arrested on suspicion of affray and has been taken to a central London police station.”

One witness explained how the unidentified man passed through a cordon as the guards were changed at their position. He commented on the situation, saying: “I thought ‘Oh my God, I can’t believe it’. There must have been about 15 police officers on foot who surrounded him once he’d been Tasered. The police saw him really quickly and were obviously cautious. He was in his 40s I’d say and I think he had knives in both hands. Everybody was standing back when it happened and people were actually quite calm, I think everyone was surprised. They had to divert the procession away from him. I think he was making his way to the guards.”

Why do we sense Princess Diana’s spirit in this story? It makes sense, considering that her son, Prince William, and his wife, Kate Middleton, are welcoming their first child to the world later this year. With this incident having targeted the Royal Palace, Diana seems to give us the impression she hates Kate – we’d hate her too if she was wearing our wedding ring.