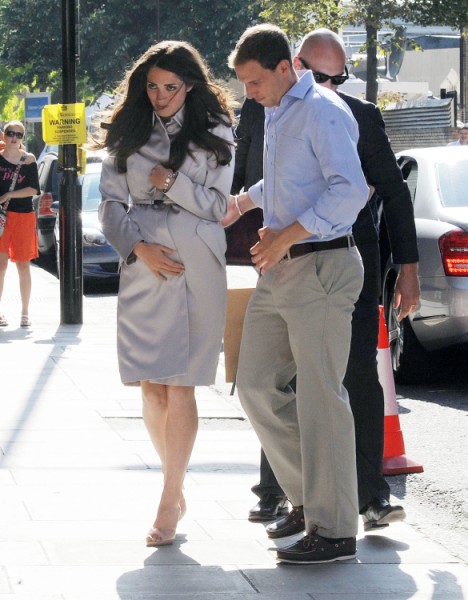 Ahh! I tried to go a day without writing about the media-hogging Kate Middleton baby but it couldn’t be done. There’s apparently more news! Or, at least, people are making up more news in the boredom.

It turns out the royal birth will happen by this Tuesday at the latest. According to the bookies, all betting has been suspended on the due date thanks to the crush of bets placed on the next couple of days. So the money suggests everyone will be put out of their misery by July 23. Thank you Sweet Baby Jesus, a.k.a. Baby Wales.

But I wonder if this could have anything to do with Queen Elizabeth and that vacation of hers. She’s already said she hopes the baby is born before she leaves for Scotland for the summer. There’s also info pouring in that Kate and Prince William will not be joining the family at Balmoral now and the Queen is not visiting at the hospital. So if she doesn’t see it before she leaves, when will she? What did you expect? She didn’t visit her husband in the husband until it was his birthday and that was several days after he was admitted. Some people just don’t like the smell.

Is that enough pressure to make Kate Middleton opt for the induction? She wanted to go all natural but the press could be getting to her. It was just released that Prince Diana asked to be induced with William because she couldn’t take all the hounding. Obviously Kate is no Diana. She seems to be made a little tougher – especially since she’s having her first child a good 9-10 years later than Diana did. But still… the world is going crazy and the Queen is going out of town… is that enough to just go for it? Because the bookies really have no say. They can cancel the betting all they want. If the baby doesn’t want to come then the baby doesn’t want to come. The question is if Kate wants it. We all know she’s not one to disappoint the Queen – she leaves that up to her sister!

Side note: Yes, of course I know the photo above isn’t the real Kate Middleton but the impostors The Sun sent to the hospital to freak out the media. Still… uncanny bitches, no?