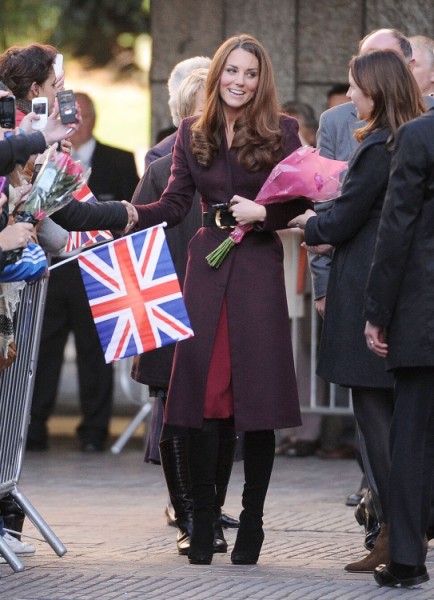 It’s all starting to make sense now. Kate Middleton’s baby bump made a lot of surprise appearances last week giving the world something to fawn and rejoice over. For a second there I thought she was just being truly magnanimous to her people – granting the little people a peek at her poncho. But now we know different. Kate Middleton was gearing up for another vacation and wanted to give the people something to remember her by… so they wouldn’t bash her for refusing to work and taking another vacation.

I feel like all I’ve been doing lately is ragging on my Kate and her less than impressive work ethic. But I’m only calling her out because I love her SO MUCH! Does Kate vacation more than most people? Yes. Does Kate work less than most people? Double yes. Point made. Case closed. Let’s move on.

I’m not saying she isn’t entitled to her babymoon or whatever the hell annoying people out there are calling this little jaunt to Mustique with her family and Prince William. They do it every year. I already called it. I might have been wrong on the date but I was close enough. We all knew it was coming. I’m just pointing out how media savvy the innocent and naive little princess is becoming. Do you honestly think it was just a coincidence that she got caught shopping out in public two times in one week before she snuck off for some beach time? She was basically playing the I’ll scratch your back if you scratch mine game. Her PR people knew another vacation would hurt since the whole reason she’s not working right now is because she hasn’t felt up to it. So this getaway could seem a little hypocritical and indulgent, no?

And for the most part it worked. We’ll keep talking about that nonexistent baby bump for the next week which gives her just enough time to pump up her tan in Mustique. Kate Middleton may be new to the royal family but she’s had ten years in the spotlight. She’s not new to the game.

Do you think the Kate Middleton vacation is bad timing or does she deserve to go with her family?  I have a feeling we’ll see some charity appearances pretty soon after she returns as another peace offering.

Update: Us magazine reported that the palace just announced that Kate has scheduled her second post-pregnancy appearance for Feb. 19. She’ll visit Hope House, Action on Addiction. Sometimes I scare myself with how well I know my Kate!