Kate Middleton Secretly Vacationing With Family In Mustique, Still Too Sick To Work? 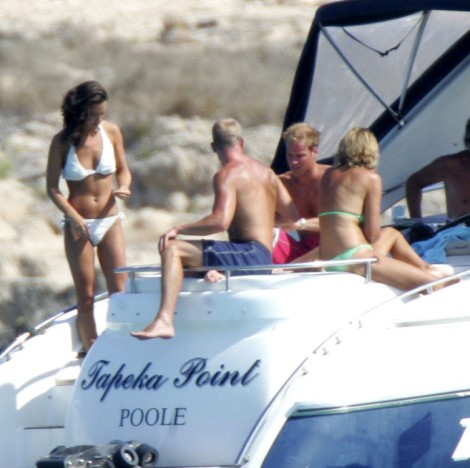 You’re heard about the spray-tan stories right? Kate Middleton’s spray-tan girl is coming out saying she sensed a royal baby was on the way before anyone else because Kate canceled tons of appointments quickly after finding out she was knocked up. Is it just me, or do you think it’s kind of tacky knowing the future Queen of England spray-tans? ANYWAY, just as Kate always manages to somehow have her cake and eat it too (figuratively, not literally of course), she has found a way to get her tan back on without harming the unborn heir. Hello Middleton Family Winter Vacation!

Now, I don’t particularly know this source but I do know Kate (in that imaginary sort of way) and I know she’s not one to pass up a vacation especially to Mustique. Kate Middleton and Prince William were always planning this getaway with Pippa Middleton and the fam just as they did last year but then Kate got pregnant and sick (wink, wink) and convinced the world she can’t do much besides look at pictures of herself, do pilates and walk her dog. I thought I heard she was going to nix this vacation because it looks SO BAD right now but, yet again, the Cambridges’ PR machine has no idea what the hell it’s doing. Again, that’s if this is even true. Kate could be holed up  in Kensington right now picking out baby blanket patterns. But I have a feeling she’s in Mustique and, until I have pictures showing otherwise, that’s what I’ll continue to believe. Because Kate loves bikinis! Kate loves the sun! And God forbid Pippa go on vacation with her family and be the center of attention! Royal life be damned! If there’s  a tan waiting to happen, Kate Middleton will be there!

But those Cambridges better hope the island does a better job with its privacy clause than it did last year.  Mustique has a ban on photographers but that didn’t stop some from taking a few pics of the Middletons last year. We got Kate going on and off the plane as well as eating with her family in her bathing suit and towel. Can you imagine how much pregnant bikini bump pics would go for? This couple has to be stealth because the demand is out of control. Unfortunately for Kate and William, their track record isn’t great. If I don’t have pictures to freak out over soon I will be super disappointed and you will be too.

Do you think Kate Middleton vacations too much especially since she’s put a halt on working for who knows how long? Was Mustique the best idea (if she’s even there)?