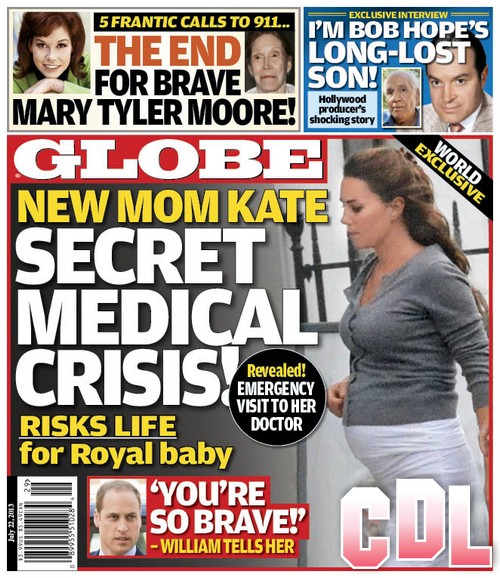 It seems like the whole world is on baby watch right now just waiting for word to break that Kate Middleton has been admitted to the hospital to deliver the royal heir. While the Duchess has popped up throughout the last several months looking stunning, with a genuine smile on her face, we now know that this pregnancy hasn’t exactly been a walk in the park. First Kate was hospitalized last December with severe morning sickness that totally depleted her system and now we’re learning that other problems have surfaced along the way.

According to the July 22nd print edition of GLOBE magazine Kate has also recently gone through a serious medical crisis that sent her running to her doctor. It has been revealed that this condition put the royal baby at risk and left Kate walking on utter eggshells. Prince William, always a solid support system, reassured Kate that things will be okay and has praised her bravery throughout the pregnancy.

Aside from the medical crisis Kate has been demolished emotionally by her evil mother-in-law, Camilla Parker-Bowles. Prince Charles‘ wife hasn’t hesitated to rip Kate and her marriage to shreds. At her last public appearance Camilla is rumored to have reassured Kate that William will find himself a mistress sooner rather than later and he’ll love her more than Kate! Needless to say the extra stress brought on by Camilla may easily have only exaggerated the medical condition that Kate has had to withstand!

GLOBE also consistently keeps long time readers in the loop with classic Hollywood stars and in this issue you’ll learn about Mary Tyler Moore’s recent frantic calls to 911 for help. Also a man claiming to be Bob Hope’s long-lost son has crawled out of the woodwork and appears to be looking for a bit of attention.

Pick up the July 22nd print edition of GLOBE for more on these stories and other hot items.  If you want the insider’s view on all the details of the approaching royal birth and consequent palace dynamics, then stick with GLOBE.  I rely upon GLOBE each week to provide me with the gossip and goings-on to which no other news magazine has access. Now that the royal heir is about to be born, I am counting on my GLOBE to guide me through the entire spectacle. Can’t wait to sit down and relax with my copy this week!