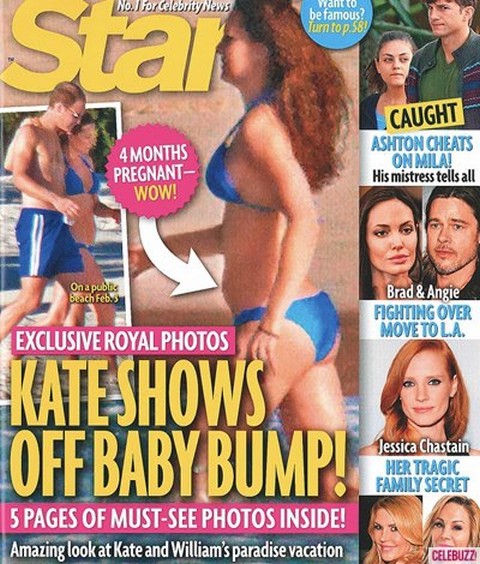 In addition to having her baby bump smeared across the pages of Italian magazine Chi, the Duchess of Cambridge, Kate Middleton, is also on the cover of Star magazine. At four months pregnant, you can really see a good shot of the Duchess’ growing belly. Cute, right?

Sources within the Palace called the photographs “violating” showing the very first clear pictures of Kate’s Royal bun in the oven. Reportedly, the photos were taken while Kate and her husband Prince William were on their vacation in Mustique. The latest gossip suggests that the photos were distributed among publishers all over the world for more than £100,000 total.

Woman’s Day Editor, Fiona Connolly said that the royal couple are not a “protected species”, adding, “This is not a hard decision. Kate’s on a public beach, there are other holiday-makers there and she looks fabulous.”

She went on to say, “She is on a public beach and she was mingling with holiday makers”, adding, “It’s a very different situation to the nude photos. There is no photographer hiding in the bushes and she is not inside a private villa.”

She continued, “The British have a great deal more sensitivity to royals than we do here in Oz. As Australians, we see this every day. We see pregnant women in bikinis on the beach – and a public one at that – so we are a lot less sensitive here. Our readers are going to love these photos. I don’t expect any backlash at all really. I think she’s looking fabulous and healthy and [with] a beautiful bump, like we haven’t seen her before. Kate looks so much better than the poorly and sickly woman we saw coming out of hospital, which makes these photos more of a celebration.”

Do you think these photos are a violation or more of a celebration at the good health of the Duchess? Hit the comments and let us know what you think!