Kate Middleton Pregnant In A Bikini! Paparazzi Strike Again While Royals On Vacation 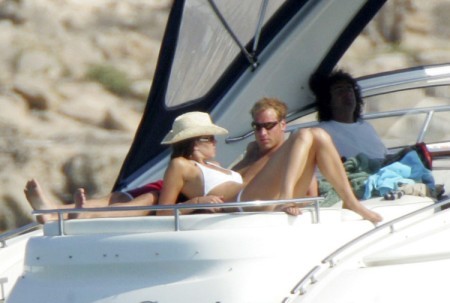 The Duchess of Cambridge has been papped again! According to several news outlets her famous baby bump has been caught in a “skimpy” bikini with Prince William and the Middleton family while on their Mustique vacation. Kate Middleton was apparently shot wading through the surf and the bump is supposedly very visible. This could be bullshit, I know. But I’m willing to believe because a member of the palace has already spoken out. A royal aid told the Sunday People, “This is unfortunate. They get absolutely no privacy whatsoever.” So it must be true! There are pics out there and I’m sure we’ll be seeing them very soon – maybe not in the British tabs – but very soon.

But at least she had her top on! There’s really nothing scandalous about this at all. Did you expect her to borrow one of Queen Victoria’s old body suits? You know how our Kate rolls. She likes the sun and wouldn’t pass up a chance to get all tan before her upcoming work engagement.

I am surprised the paparazzi managed to get some shots in though. Mustique is well known for being paparazzi-free so they must have taken it from a boat. Or maybe someone on the island snapped something with a cell phone but I doubt anyone got close enough to do something like that. This is very similar to the Seychelles situation during their Honeymoon. The couple got papped there as well even though they were told they were completed isolated on the island. You’d think the Cambridges would get smarter about this. Or maybe they just don’t care anymore. Kate had her top on this time and it’s not like she’s always been against being photographed in her bikini. She didn’t mind posing for the paparazzi in Ibiza in 2006 when she was just William’s girlfriend. I’d like to think the Cambridges have chilled out but, knowing William (and I don’t), I’d say that probably isn’t happening. But, again, how good can the photos be? Pictures were snapped of them in Mustique last year and they were grainy and boring. I have a feeling that might be the case again. Still, no one thought the paparazzi could get close enough during the French vacation that created the topless scandal last summer and those photos showed just enough to be interesting….

Are you excited to see the Kate Middleton pregnant bikini photos or are you disgusted the royal couple can’t get any privacy? Still… you’re going to sneak a peek, right?