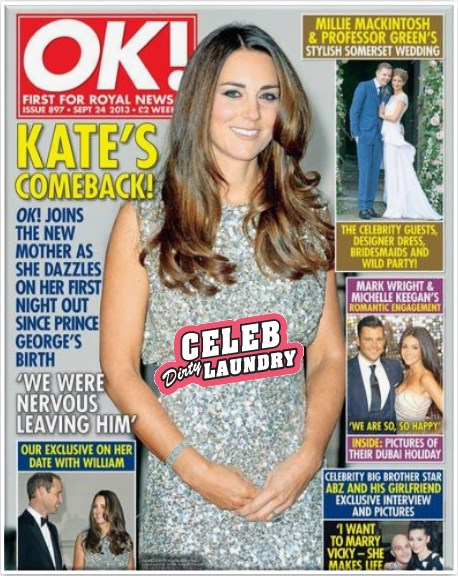 How did Kate Middleton manage to look so fantastic just weeks after giving birth to Prince George? That was the question running through all of our superficial minds when Kate and Prince William made their first official appearance after George’s birth at a charity event for the Tusk Trust.

It was the first time that both Kate and Prince had been away from George for an entire evening, as William and Kate nervously told the crowd, “We were nervous about leaving him.”

No doubt, Kate made a dazzling comeback in the beautiful beaded and sparkly Jenny Packham gown, which showed off her post-baby body. Kate never seemed to have gained a ton of weight during pregnancy, but whatever she did put on, she sure managed to shed fast. The gown hugged her curves, but she showed only a hint of a belly and looked much she like she used to before the pregnancy – except for the glow she carried around as a new mother.

According to British OK! Magazine, the event also served as a date for William and Kate, who haven’t had any time alone since George was born. As any new parents will attest to, it’s hard to get some couple time with a baby crying in the next room. With the nanny watching George, William and Kate were able to enjoy each other’s company, and were able to have a nice ‘date’, for lack of better word.

What do you guys think of Kate Middleton’s ‘comeback’? Do you think she looked great? And it’s nice that she and Will got some time together away from the baby, considering that will be hard to come by in the next few years – especially if they plan to stick to their hands-on parenting tactics. Let us know your thoughts in the comments.