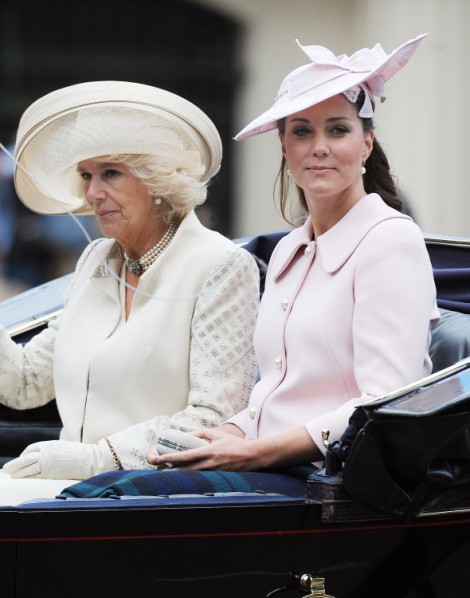 How’s the wait going for you? I’ve actually taken it well partly because I never actually believed July 13 was the actually due date. Kate Middleton only ever said mid-July and the palace went along with it because they couldn’t backtrack after she already let the cat out of the bag. Mid-July can mean a whole host of things so Kate could have a couple days to go yet and, judging by Camilla Parker-Bowles latest foul up, we may be on to something.

Camilla and Prince Charles are taking part in Cornwall Week where she gave a little impromptu speech saying, “We are all just waiting by the telephone. We are hopeful that by the end of the week he or she will be here.” The palace has confirmed her statement.

At first, because I read between the lines whenever a royal speaks without a cue card in sight, I thought she admitted a scheduled Kate Middleton c-section was taking place later in the week. It makes sense. Charles and Camilla will be back from Cornwall by then and it would explain Prince William’s willingness to go play polo over the weekend. Kate is probably hoping to naturally but she has also probably agreed to the c-section by Friday if it doesn’t happen. Have you seen that woman’s hips? She’s not going to let herself go more than a week over without intervention due to fears the baby will be more than 7 pounds.

I love reading the comments section in the Daily Mail. Tons of people think Camilla didn’t just let this little bit of news “slip” out. They assume she’s using the Kate Middleton baby to increase her popularity. I’m not thinking that hard about it. It seems the women have a good relationship. I’ve never sensed anything otherwise and, say what you want about Camilla the homewrecker, but Camilla the grandma seems a better fit. Do you remember the pics of Charles holding up Camilla’s granddaughter while on the balcony during the royal wedding? So cute! So maybe Camilla is just really excited but I’d love it if all the pro-Diana people out there would blast me on that. It’s always fun to hear what they have to say!