Pippa Middleton Parties In Vienna On Kate Middleton’s Due Date, What Don’t We Know? 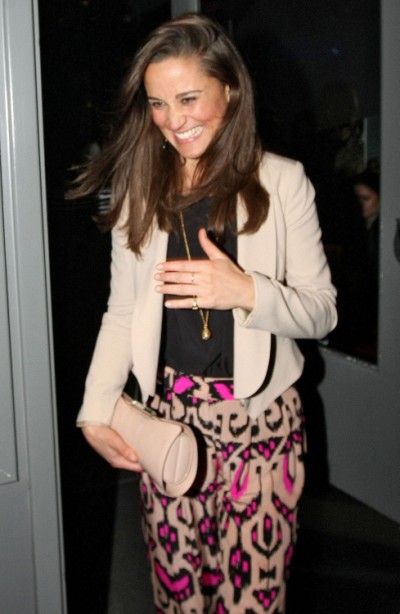 Something’s just off. I don’t know what it is but everyone just seems way too cavalier about this royal baby. First Prince William spent the weekend playing polo with Prince Harry hours away from his pregnant wife and now we’re hearing that Princess Pippa skipped out all together and attended a wedding in Vienna. Pippa Middleton isn’t one to miss out on the action especially when a major royal event is in the mix. So what’s the deal? Was Kate Middleton’s due date really this past weekend or were we all given the shaft on the info?

I’d like to think that Pippa’s over the whole thing and not willing to put her social calendar on hold to lord over her lucky sister in Berkshire along with all the other eager peasants. But the sisters are close AND this is the first grandkid. I’ve got eleven young nieces and nephews. At this point whenever a new one is born my sibling is lucky to get a phone call of congratulations that week. But with the first one, we were all crazy excited and waited at the hospital at 3 a.m. to meet the little monster. I can’t imagine Pippa would choose a wedding over the possibility that her sister might give birth. But the Pips has been a little renegade lately so who knows where her head is at.

Perhaps this is just all a part of the royals’ plan to stay as level-headed as possible during this exciting time. The Telegraph reported today that Charles and Camilla are going forward with plans to visit Cornwall for the front part of the week. They should be back in London by Thursday. It’s not like Kate’s in London anyway so why wait there I guess. And it’s not like they won’t drop everything to get back in town if there’s any news. England isn’t Russia – getting from one end to the other isn’t that taxing.

So maybe that’s just it. Everyone’s playing it cool. Why would Kate Middleton lie about her due date? If anything she should have lied and said it was later than it really was so people wouldn’t be hounding every day she’s seemingly “overdue”. That makes no sense. She’s a first time mom AND a commoner carrying the heir to the throne. Perhaps the royals and her family members are stepping off to help her catch her breath. Am I missing something smuttier? Let me now!