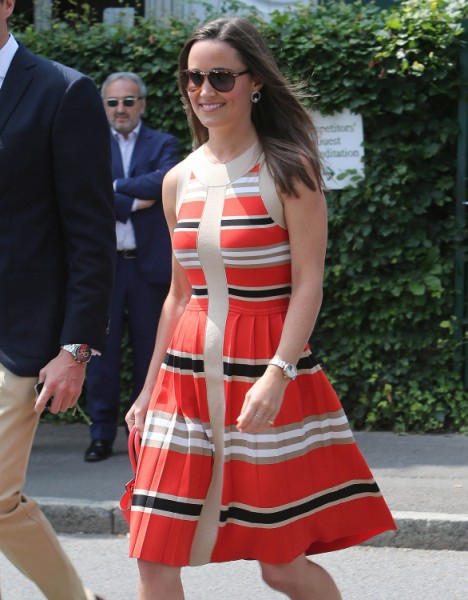 I told you! You can’t hold Pippa Middleton down! Not during Wimbledon season. She warned us that she’d be back for a second day of tennis watching and it seems even Kate Middleton’s demands weren’t going to keep this younger sister back from stealing the spotlight during the men’s semi-final round.

And look who we have here. She isn’t hiding behind baby brother today. Pippa brought boyfriend, Nico Jackson, to join her in the festivities. But not only did she do that, she also spent time in the royal box cuddling and holding hands with him. Talk about not asking for any attention. I’m actually beginning to think Pippa is trying to piss off the royal family. You’ll remember we reported last week that Kate and Prince William asked Pippa to tone down all her appearances and try not to cause such a commotion in the press. Pippa responded in kind by going out to about three public functions the following week. And now we have this loved up center court appearance at Wimbledon. Pippa Middleton couldn’t be throwing caution to the wind, could she? Or is she just blissfully in love? She has two of her passions together – well three, if you count the paparazzi. Can we blame her for acting all giddy?

Let’s talk about Nico for a second. The only other time Pippa brought a boyfriend to Wimbledon was a couple years ago with Alex Loudon. Those were some different pics. Either Pippa is more in love this time around or Nico’s more game for playing it up in front of the photogs. He’s not an idiot. He knew they were going to get papped sitting in the royal box and all. Is Nico Jackson Pippa Middlton’s Justin Theroux? The problem Jennifer Aniston had for some many years is that the dudes she was interested in never wanted to put up with her celebrity shit. Pippa had the same problem with Alex. Nico seems to have no such qualms. He might even enjoy it. Can you feel Queen Elizabeth pursing her lips right about now? Dear Lord, I can. Pippa Middleton’s found her match and that can’t be good!

P.S. That dress is hideous.