Kate Middleton Orders Pippa Middleton To Stay Out Of The Limelight, Stop Famewhoring! 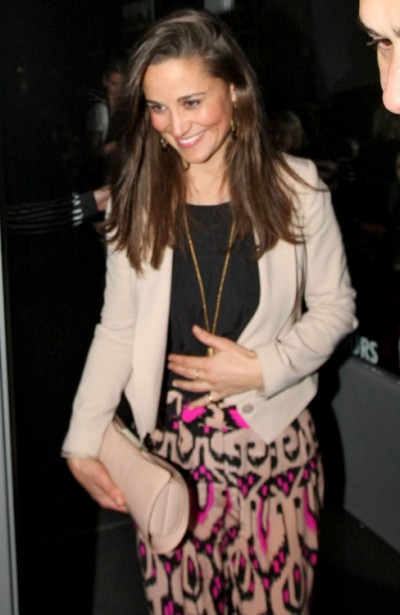 Pippa Middleton’s been all over the place lately. You can’t go on any British tabloid without seeing pics of her at another society wedding or tennis match or hear about a new writing assignment or party appearance. She’s definitely ditched her granny cardigans and inhibitions this summer season. But apparently not all are so excited for her new-found confidence in the public eye. According the The Daily Mail, Pippa has been quietly told by Prince William and Kate Middleton to stop making so many public appearances which basically means sit down and shut up and stop getting papped so much.

“Pippa has been asked to tone it down. Kate and William didn’t want her to write her party planning book Celebrate, let alone a regular column in various magazines. They have spoken to her about this. She’s been strategically scaling down the amount of times she is pictured at launches, especially clothing launches. She is trying her best to avoid the cameras where she can,” a source said.

This probably has a lot to do with the celebrity tennis match she opted out of a couple weeks ago because it would interfere with the Queen’s appearance at some horse thing. But is Princess Pippa being a dutiful little sister? Since that tennis charity event story I feel like I’ve seen Pippa out and about even more. It’s Wimbledon season for christ’s sake! How the hell were you going to keep her out of the royal box?? She’s also attended the wedding of the year, written guest posts for Vanity Fair and The Spectator and made close to three appearances last week. Is she being a team player or is she finally going rogue? The Daily Mail pointed out that Pippa’s keen to keep her independence right now. She gave the ultimate screw you to Kate and her mother by leaving their Richard Ward hair salon and now is getting her cuts at Rossano Ferretti. The nerve!!

All does not sound well in the royal family for Pippa Middleton. Kate Middleton gets ordered around so much, do you think she gets pleasure out of bossing her little sister around? There might be some sick smugness going on there in the best sisterly sense. We’ll have to watch and see Pippa’s next move. She’s already hinted she’ll make another Wimbledon appearance. She was in the royal box with her sister for the finals last year. It looks like Brit Andy Murray might get there again so I’d expect her front and center which will piss off a lot of people – including some royals. Should be fun!

What do you think? Did Kate Middleton order Pippa Middleton to tone it down? If so, does it seem like she’s listening?