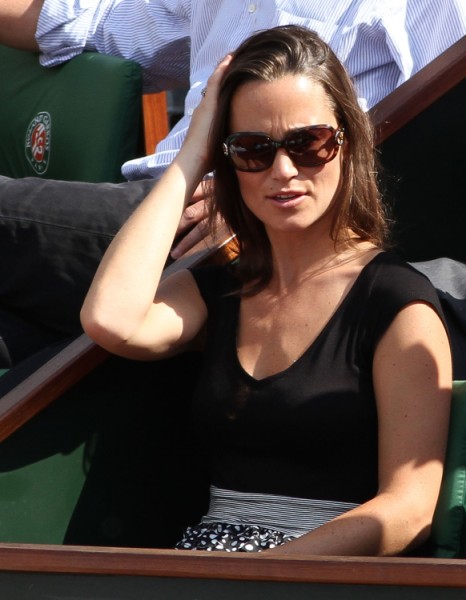 I want to see Pippa Middleton play tennis so badly! She’s supposed to be good. She’s supposed to be an expert. She looks amazing in her little white tennis skirt (which is probably why Nico Jackson couldn’t keep his hands off her ass when she was wearing it). And I’m not the only person who wants to judge Pippa’s forehand. After learning she was to take part in a charity tennis at The Queen’s Club in London last weekend, the palace had a little freak out and asked her to sit out instead. According to The Telegraph, the palace banned Pippa Middleton from the event because it was worried that pics of Pippa in a tight little white ensemble might sway some editors to follow her around that day instead of Queen Elizabeth who was scheduled for the Cartier Queen’s Cup. Well… duh.

“Pippa was informed that it would not be prudent for her to participate,” a source said. “It was unfortunate we hadn’t addressed the issue earlier, but Miss Middleton took on board what we had to say.”

Oooh, that seems last minute. I bet she was pissssssed. Pippa loves her tennis and I heard she really, really likes to show off how good she is. This would have been prime for her surrounded by celebrities and photographers.

The Telegraph goes on to say the palace is “concerned at Miss Middleton’s appetite for publicity.” Really? That’s interesting. Yes, she wrote that shit book right out of the gate but has she seemed famewhorey lately? She’s seen out at the clubs just as often as those York princesses so that shouldn’t be an issue. She has that new Vanity Fair writing job but it’s limited and she writes once a week for a supermarket chain magazine. I’d say the hunger has been tempered. The palace slapped her down pretty hard during the publicity tour for her book and she’s been reticent to make any big splashes since then.

Is Pippa getting restless? Is she whining in Kate Middleton’s ear about all the opportunities she’s had to give up? Makes you really wonder what that whole business she’s starting is about…. Could Pippa be ready to finally start moving and shaking? Could the charity tennis match/Pippa Middleton restriction be the straw that breaks the camel’s back?