BY Jeanne Adams on May 12, 2013 | Comments: one comment
Related : Celebrity Pregnancies, Kate Middleton, The Royals 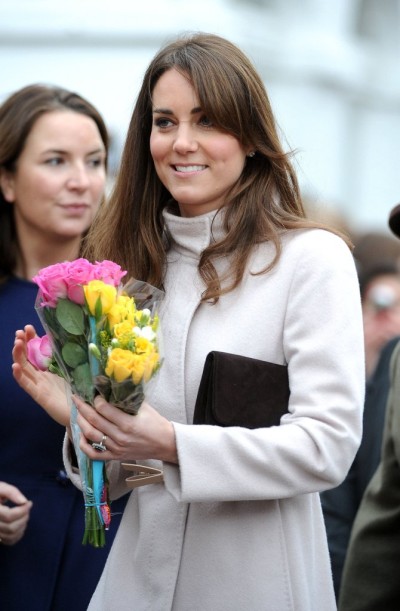 As usual with the Duke and Duchess of Cambridge, private news doesn’t tend to stay private very long. Just days after it was learned that Prince Harry was bragging around town that there’s going to be a new little prince, it seems royal friends are leaking Prince William and Kate Middleton’s due date. July 13 is the date to watch for. Hooray!

Due dates are weird. Do people really care about these things? Babies rarely fall on them anyway. Kate could go two weeks early or two weeks late so it really doesn’t matter. I suppose knowing the due date puts us on alert around that time which is nice from a media perspective but we all pretty much figured it was coming around then anyway. The Royalist reports that it heard Kate was due more in early July but that just doesn’t look right with her bump. She looks like she’s got a good three months to percolate yet. Kim Kardashian could have the baby tomorrow for all I know but Kate could use those extra two weeks for sure.

But this is all if we believe the  Mail on Sunday. According to it Kate and William’s friends were overheard discussing the date at a barbecue. Apparently that date falls right smack in the middle of the Queen’s 4-day Coronation Festival so no doubt  Kate and Wills will be no shows baby or not which means there’s no reason to even watch. But the best part about all of this? It could land on Camilla’s birthday. The Duchess of Cornwall blows out candles on July 17. Who wouldn’t want to share a birthday cake with Camilla Parker-Bowles? That’s too bad. Everyone was so hoping the baby would share Princess Diana’s July 1 birthday instead. The irony is lovely.

Do you think Kate Middleton’s baby boy has a better shot of being born on his grandma’s or his step-grandma’s b-day? I’m putting my money on Camilla. Things always seem to go her way….