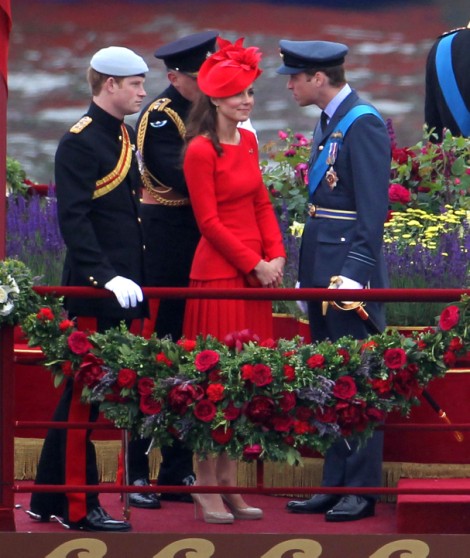 Prince Harry has only been back from Afghanistan for a little over a day and he’s already screwing everything up in the best possible way. He’s mentioned how he likes to piss in his helicopter, how he still pretty much blames the media for all of his problems and how he loves to kill the Taliban. For the taciturn Windsors this is akin to reading from your diary.

But he didn’t stop with himself in Afghanistan. Prince Harry told reporters that Prince William is probably a little jealous of his ability to go off to war and he doesn’t understand why the heir to the throne can’t be shot at like the rest of them. These interviews couldn’t have made Kate Middleton or the rest of the royal family very happy, right? He’s such an amazing dumb ass which is crazy considering the education this kid had. They ship him off to war because he gets caught with his pants down and the second he’s back he can’t shut his mouth to save his life. Oh, sorry, correction. According to Harry now, he was only blowing off steam in Las Vegas because he knew he was going to Afghanistan. AND the papers knew it too but chose not to report on it. Whatever. There’s nothing like a good bit of revisionist history!

Check out the video below. It’s pretty awesome. You can’t help but smile because the kid is just so clueless. You have to shake your head at his lack of filter. There’s not even a second or two of wondering about a filter. He just goes for it which is why we missed him so much, right? William might look like his mother but he’s all Windsor. Harry is straight up Spencer. He’s silly and fun and emotional and delusional and everything we loved about Diana. That’s why Harry can do no wrong!

But was he right to suggest Prince William fight in wars? Why bring it up now? That ship has pretty much sailed since William announced he’s going to be a dad. Was Kate Middleton furious at the idea or did she just shake her head and giggle at Harry like the rest of us?