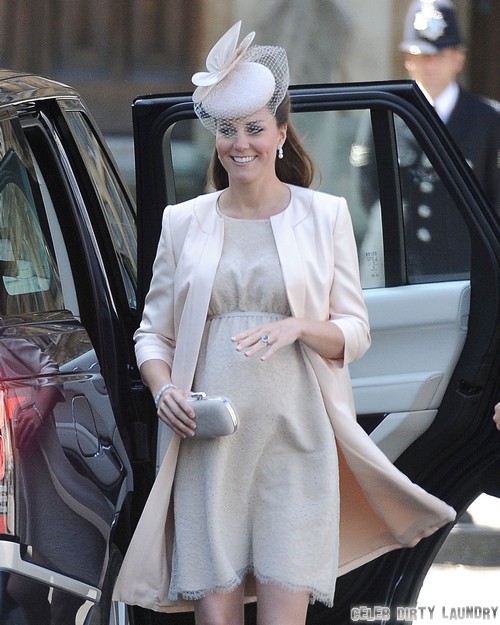 One of the many theories thrown out there was that Kate Middleton‘s Due Date was in fact not last week but this week. That’s why Prince William was able to play a game of polo with his brother and why he’s been with his wife Kate all week long. Today its been confirmed that are Kensington Palace awaiting the birth of their first born.

But here’s where we run into trouble. Yesterday Kate left her parents’ house in order to make a trip into London. Everyone was getting exited and starting to hope the Great Kate Wait was over but we’re wrong. It might have been two things, a check up with her doctor or a trip with her dog Lupo to to see his vet. Either way our hopes were dashed and then kicked on because of The Sun’s stunt yesterday.

The only reason the press no longer believe she’s staying at Bucklebury is the lack of security there now. Before the place was teaming with security officers and now it appears to be deserted. Yeah! Finally, we can put away fears she’ll be delivering at a different hospital. Now all we have to figure out is where is she? The royal couple’s people aren’t talking when let’ face it they should and some of the photographers have to leave the standstill. Belgium is getting a new monarch tomorrow. If this baby doesn’t come soon its going to lose some serious press coverage.

Which if we’re honest; Prince William will at least be happy. He hates the press and it starting to show with the poor guys out on the trenches. There are so many other ways he could have and should have played this. If the baby was due mid-July then claim late July/ early August. This way when the baby comes early or on schedule there will be less frustration. He threw out July and left it there. That was dumb. Do better for the spare than you did the heir.

If you want to watch the live stream video of the wait for Kate at the hospital, CLICK HERE