Kate Middleton’s Baby Gets Its Head Stuck In the Gates – Firefighters Respond! 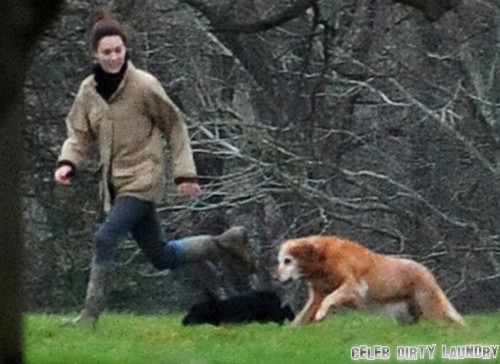 Oh, you guys all thought it was Kate’s human baby, didn’t you? Well, Kate Middleton’s dog was the victim in this situation. At Kate’s family home, Bucklebury Manor, a dog got its head stuck in the gates and firefighters rushed to the scene. The dog was rumored to have been Lupo, Kate’s pet cocker spaniel.

An eyewitness told the Daily Mail that he heard someone screaming out Lupo, saying, “Soon after I heard a high-pitched scream which sounded like a dog is distress. I presume that was when they were pulling the poor animal out from between the bars of the gate.”

Apparently, the dog managed to free itself before the animal rescue and firefighter team got there. A source from the Royal Berkshire Fire and Rescue team said, “Our crew got to the manor but were told as they arrived at the gates that the dog, which had got its head stuck, had been freed just a few moments earlier so their services were not needed. The animal rescue unit was stood down before it reached Bucklebury and the appliance returned home.”

Even though it wasn’t the royal news we wanted, at least it’s news. Considering that this would never have made headlines if the world wasn’t so desperate for any updates on Kate’s baby situation, it’s looking like people are getting antsy. I don’t blame them – most reporters have now been in London for a week, which is probably not doing wonders for their budgets.

What do you guys think about this report? Do you care that Kate’s dog was caught in a gate, or are you – like everybody else – waiting for Kate to actually go into labor? Let us know your thoughts in the comments.