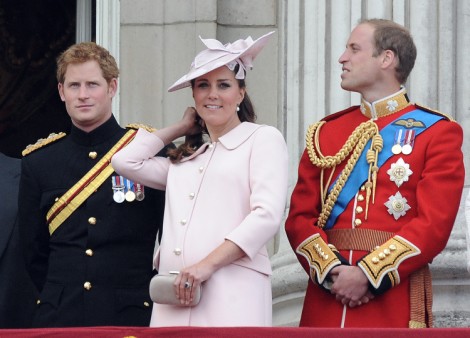 Personally, I don’t see how this is possible. Kate Middleton could be lying about her due date but only if she’s telling people she’s due much earlier than she truly is. Right now the official Kate Middleton due date is July 13 but dear God, have you seen her lately? She looks nothing like a woman on the verge of motherhood! I initially was going to go all Beyonce with this post title and accuse her of padding the bump in public to give the people something to be excited about because when she’s just out alone with Prince William there’s still next to nothing there. And don’t give me she’s tall and skinny and this is her first child. Even tall, skinny women have baby bumps and Kate’s is minuscule.

Case in point. The Daily Mail published pics of Kate and William covertly hitching a ride on a helicopter last month. Some hikers managed to get the pics and they didn’t even know it was the Duke and Duchess until much later. Does that look like a woman in her third trimester? I was floored when I saw the pics. And I’m a Kate apologist. I get that she’s slender but holy hell! How could this woman be lying about her due date?

But some say she’s following Princess Diana’s lead. Apparently Diana gave the press a later date so they’d stop hounding her. Insiders think Kate is doing the same which means we could have a little heir around the Fourth of July which is only fitting since Americans seem to freak out over the monarchy more than the British do. But, again, I don’t know. I’m still pretty sure she’s wearing her old skinny jeans. Good for her I guess. Maybe I’m just jealous…. Wouldn’t be the first time!

What do you think? Is Kate Middleton lying to get a little more peace and quiet?