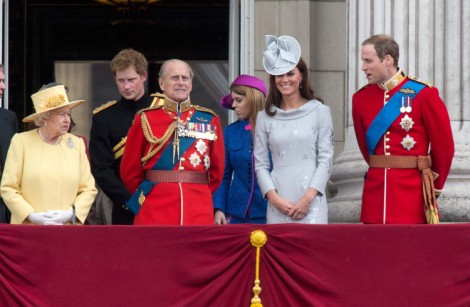 I like Prince Philip. I can’t help myself. I know he’s crusty and been known to cheat on his wife and say stupid, inappropriate things but he also seems like a bunch of fun. When Prince Harry and he are together they always seem to be chuckling and you just know they are saying dirty shit back and forth. He’s the lovable grandpa that doesn’t believe in being PC but you give him the pass because he’s old and he manages to get out of bed and use the toilet without asking for your help. The fact that Phil keeps on keeping on beside that energizer bunny wife of his is admirable and Kate Middleton and Prince William must think so too because they are reportedly naming their newborn son after the Duke of Edinburgh.

That’s if they have a boy of course. I still think it’s a girl all the way. Kate spent most of her Scottish trip telling everyone who’ll listen that she still hasn’t locked down any baby names yet but that might have been just for show. It seems Philip is the frontrunner. It makes sense since Will’s full name is William Arthur Philip Louis and his father’s is Prince Charles Philip Arthur George. Why can’t it be Arthur? How amazing to have a King Arthur on the thrown!! But I’m not hating on Philip. Naturally, because I have the maturity level of a ten-year-old, all I can think about is Prince Philip in Sleeping Beauty. He’s definitely one of the hottest Disney princes so I’m OK with this.

And I can’t talk about Prince Philip without bringing this story up. He and Harry and William are super tight. It’s rumored that when after Princess Diana died, William didn’t want to walk behind the coffin because he was afraid to do it because he wasn’t sure if he could walk without crying. Apparently Philip, who wasn’t supposed to walk with the group, told William he would do it with him to make sure he got through it OK. That makes my heart hurt every time I hear it. So sweet! So he’s definitely had his crusty douchey times, and perhaps wasn’t the warmest dad to Charles, but it seems like he was a great grandfather. It’s a nice tribute if it happens.

Do you think it’s a good name choice for Kate Middleton? Baby boy names are hard!