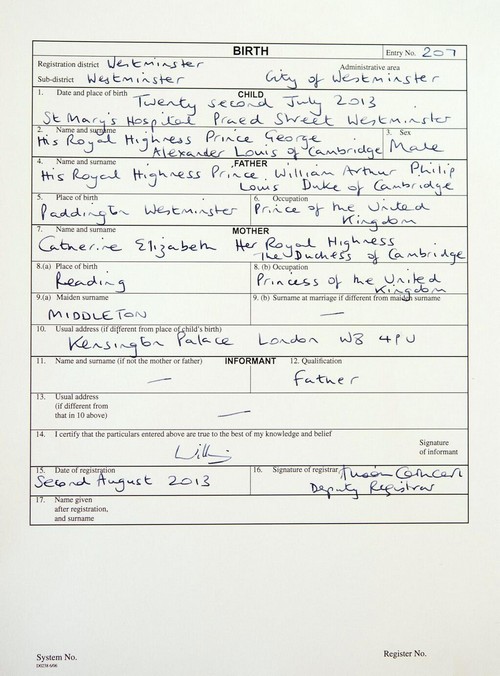 Not a bad job title, eh? Kate Middleton’s job title is being a ‘princess’. The official birth certificate for little Prince George has made its way online, which was filled in by Prince William.

Most of the information on the certificate is already news we know, including the fact that George’s full name will be ‘Prince George Alexander Louis of Cambridge’, and he was born in St. Mary’s hospital in Westminster, the same birth place of William himself.

It’s absolutely amazing how Will didn’t even try to sugarcoat it, and he doesn’t need to. Can you imagine your job title being a prince or princess? Obviously, this is big kick in the face to everyone who keeps insisting that Kate’s official job title is ‘duchess’, which they clearly disagree with. In today’s day and age, it’s actually surprising that Will would keep Prince or Princess as an ‘official’ job title, but then again, they are the Prince and Princess of the United Kingdom – why would they try to change it? It’s not like they have any other job.

The rest of the information on the certificate is birth information, both of George as well as Will and Kate. However, the second best part of the certificate is Will’s signature. So usually, when normal people sign, we have to put our first and last names, right? Or at least, some form of both, whether it be initials or the full name? Well, Will’s is just – wait for it…William. That’s right. It’s just William. Not Prince William. Not William Cambridge. Just William. Like, duh. Don’t you know who he is?!! Man, I love the royals.

What do you guys think about Will’s signature and Kate’s official job title? Let us know your thoughts in the comments.