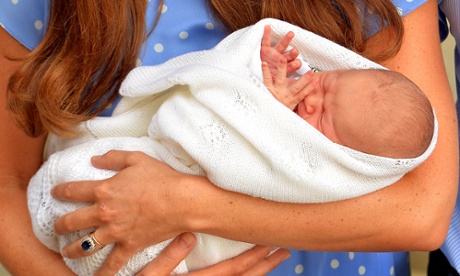 Now that Prince William and Kate Middleton have created the smallest BIGGEST royal rock star in world history, we sit scratching our heads wondering why Katie is so freaking lucky? The royal couple’s bouncing baby boy will be known as George Alexander Louis aka His Royal Highness, Prince George of Cambridge. Bookies around the globe who gambled on a royal baby girl, are crying in a cheap glass of rum and coke at news of the Cambridge couple’s new son.

Psychic betters who favored the name George, mysteriously shut down Paddy Power (an Irish bookmaker) by aggressively placing their bets in the salty beef pho. According to Paddy Power’s blog, you would get your money back if the royal crying machine is named after you! If this is totally true, all the betting Georges worldwide have left their dedicated wives, for younger, skinnier versions.

This trend setting, modern day Meryl Streep and Don Gummer actually announced the birth on Facebook and Twitter. Just because Kate dedicated her post delivery style to Princess Diana, doesn’t mean she didn’t invite Snoop Dogg to her engagement party. We were all baffled by the selection of the assumed and expected name, ‘George’. The baby could have possibly been named ‘Michael’ like her dad, or ‘William’ like her husband? What about Isaac (Ike)? Better yet, what if she named him Spencer, Diana’s maiden name? Or James like her brother? Or maybe even Larry since it rhymes with Harry?

Since Prince Charles and Diana waited a week before announcing William’s name, and Queen Elizabeth II and Prince Philip took about a month to name Charles, we thought we’d see George Clooney married before we got the official announcement of the baby’s actual name. Thank God she didn’t follow her ‘Waitie Katie’ tradition, and make us marinate for too long. For now, it’s right back to complaining about Obama Care and gas prices, while we idolize the Boston Bomber on the cover of Rolling Stone. Go figure.