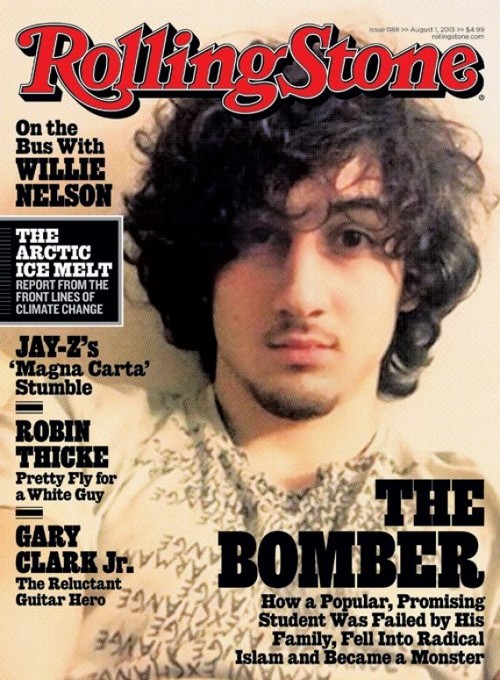 So by now, I’m sure everyone knows that the new issue of Rolling Stone was released online. It features the Boston Bomber, Dzhokhar Tsarnaev, on the cover, and it’s made some people very mad.

Now, I’ve read the article, and it’s a very well written piece. This is what investigative journalism is – trying to find out what happened. They did extensive research on Dzhokar’s past, and interviewed everyone close to him. What they were trying to do was give the public some perspective on how a seemingly bright young man who grew up in the US turned into a radical Islamic terrorist.

I agree that Rolling Stone should have also devoted a cover to the victims and the first responders, probably before they devoted a cover to the bomber. But we know about how brave the first responders were, and how strong our people were in the face of adversity, especially in Boston. What we did not know was what was going through this kid’s head, and Rolling Stone tried to provide us with some answers.

A lot of people’s anger seems to be placed not on the article itself, but on the cover photo used for the article. Some are angry that he looks like the ‘sixth member of One Direction’ [taken from the comment section of the Huffington Post], and others are angry that his photo was used at all. But when the article is about him, it would have been misleading to put another photo on the cover, right? And even beyond that, people believe that it’s exploitative. There are hundreds of Tumblr fangirls who find this guy attractive, and they don’t need another reason to keep to their sick, twisted fantasies. But I hardly think Rolling Stone thought of all that, even if they should have. It was his Facebook photo, and it was used before on the cover of the New York Times. They simply took one of the clearer and more recognizable photos of him online, and decided to use it for their article.

I mean, I’m sure Rolling Stone knew they would cause controversy with this cover. People don’t want to understand the motivations of a terrorist, and they don’t want to look at the face of a man who deliberately killed other people and kept a city under siege. They don’t want to be reminded, and under that basis, CVS has already issued a statement saying that they won’t be stocking this issue at all. They said, “As a company with deep roots in New England and a strong presence in Boston, we believe this is the right decision out of respect for the victims of the attack and their loved ones.”

Again, there are very clear opinions on both side of the argument. Those that argue against the issue are trying to hit out against what they deem the ‘exploitation’ of a tragedy’, whereas those that argue for it are saying that we need to understand what led to this tragedy, so we may try to prevent it in the future. The article and its cover are not a tribute to the bomber, but a study in what led to his actions.

What do you guys think? Do you think CVS made the right decision in not stocking the article? Or do you think they’re wrong, and people have a right to decide for themselves whether they want to read the issue or not? Let us know in the comments.