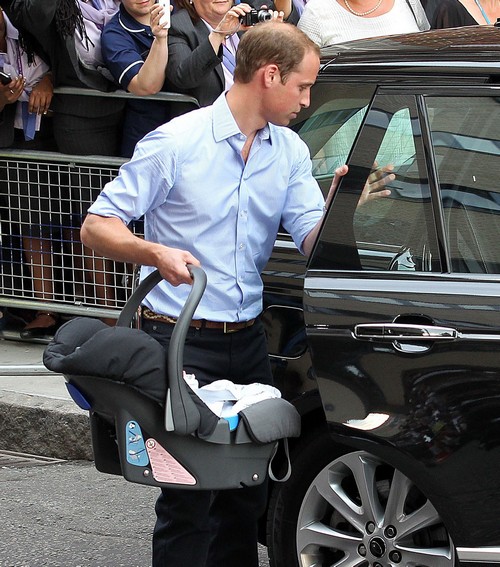 The Royal baby, George Alexander Louis, His Royal Highness Prince George of Cambridge, has taken his first road trip. The young prince along with his parents Prince William and Kate Middleton left Kensington Palace today and headed to Bucklebury.  The new parents will spend  time bonding with her son in the comfort of Kate’s family home, surrounded by her family members.

It is unclear how long Will and Kate plan on staying in Bucklebury but she will most likely want her mom close for the first couple of weeks, as she embraces motherhood. It is not uncommon for a new mother to want her own mother close after she gives birth and Kate is proving that she may be a Royal but she is still a commoner at heart.

This is a really big deal because it means that the Middletons will play a significant part in the raising of the Royal heir. It is unheard of that anyone outside the Royal family would have such a say in the upbringing of a child that will one day ascend the throne. It also means that Queen Elizabeth has approved not only the temporary move but the involvement Kate’s family will have in the boy’s life. It is a whole new era. The Queen is open to Kate and William being close with the Middletons, which says volumes about how she feels about her grandson and his wife.

With all the change that Will and Kate are bringing to the Royal family it will no doubt leave some of the members not too happy.  I am sure all those cousins who have snubbed her for years will have something to say about her taking the baby away from the palace. Plus can you imagine just how pissed Camila Parker-Bowles must be that the Middletons are getting to spend the first days of the baby’s life with them, as opposed to her and Prince Charles. After all she has had to go through to be only marginally accepted by the Royals and now rules are being changed to include Kate’s family so quickly, talk abut a slap in the face!

The future King is spending time with his grandparents, not Prince Charles or Queen Elizabeth but rather Carole and Michael Middleton. What do you think about the huge news that Will and Kate are spending their first week as parents with her family as opposed to his family? Tell us what you think in the below comments section.