Kate Middleton Is Very ‘Jane Austen’ And Has No Personality, Slams Critics 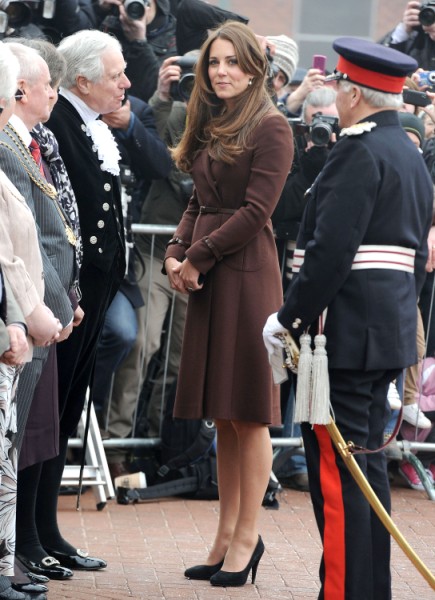 You’d think slamming Kate Middleton in Britain was popular so many people seem to be doing it nowadays but it’s really not. Every time someone comes forward with a negative and/or rather harsh opinion of the Duchess of Cambridge she gets hit with monster backlash. But Kate Middleton’s critics aren’t backing down probably because they get a lot of attention when they do it and probably because they are sorta right most of the time.

Hilary Mantel started the trend a few weeks ago when she blasted Kate for  being plastic and made for breeding. In actuality she never really said those things (her words were screwed out of context) but that’s the message people took home at the end of the day. And now, Radio 4 presenter Sandi Toksvig is joining in the fun. She recently said: “Kate Middleton is not enough for me. We used to admire women who got their place in life through marriage and having children, but I like to think we’ve grown up a bit. I can’t think of a single opinion she holds – it’s very Jane Austen.”

Does she have a point? Sure. I can’t seem to think of any of Kate’s opinions either. Whether she’s created the image or the palace created it for her it’s never really deep with Kate. What you see is what you get. She apparently loves to shop, loves to play sports and eat healthy and loves Prince William. What else should we want from her?

We can all agree there’s probably a lot more to this girl. She managed to keep the most illegible bachelor in the world interested for ten years before he married her. There’s got to be some substance there but the palace (or she and William) are reluctant to let us in to see it. I can see this coming from William’s end actually. One of his major complaints in the past was that the world took so much from his mother. Princess Diana had no privacy and no life really. She was the people’s princess in name and spirit. Is he afraid to let Kate truly show her personality to the public because of the slippery slope? We’ll never be satisfied you know. We’ll just keep wanting more and more. Is it better to have no personality with the public than have too much?

How the hell does the Queen do it? People feel like they know her yet she’s as stoic and reserved as they come. It’s an art form and Kate is obviously trying to emulate it but she’s not pulling it off just yet. Perhaps she will in time but, like I said before, people may give Kate a harder time with her royal personality since she wasn’t raised that way. It’s all Queen Elizabeth knows.

Do you agree with the Kate Middleton/Jane Austen comments? Is Kate hiding her personality on purpose or is nothing really there anyway?