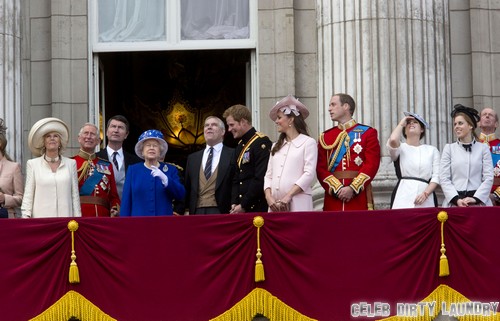 Kate Middleton has been tormented by Camilla Parker-Bowles pretty much from the get-go and the feud between the two has reached epic proportions in recent weeks. It’s pretty clear that jealous Camilla resents the fact that the Brits adore Kate and she views Kate’s pregnancy as a way to steal attention from herself.

During Kate’s final formal appearance she had to share a carriage ride with Camilla that proved to be crushing. Camilla reportedly told the Duchess that once she delivered an heir Prince William would find a mistress – a woman that he can really love. That exchange of words caused Kate to ban Camilla from being anywhere near her baby and the Queen also ordered Camilla to stay a mile from Kate and her baby, according to GLOBE.

Unfortunately Royal protocol will ensure that Camilla knows the first details of Kate’s delivery before the Middleton’s even hear a word. Right after their baby is born Prince William will call Queen Elizabeth on an encrypted line with all of the details. At the same time, the Royal couple’s private secretary, Jamie Lowther-Pinkerton will inform Prime Minister David Cameron and a small number of other highly placed individuals, including the Archbishop of Canterbury. Palace officials will notify the head of each of the 54 Commonwealth countries and the First Ministers of Scotland, Wales and Northern Ireland. Finally a glass easel will be placed outside the palace with all of the pertinent details announcing the royal delivery.

In other words, The Middleton’s will find out after the Royals in order to ensure privacy and protocol. While Camilla may be banned she was still be the grandmother that has the information first and you better believe she’ll make a big deal out of it!

Kate is upset that her own family including her own mother, Carole Middleton – the people that she will actually be staying with once released from the hospital – are so far down on the list. While she and William have been able to successfully challenge several of the royal traditions, this one seems a bit unlikely.

Can you imagine Kate’s frustration? So close to shutting Camilla completely out but of course, there’s always a loophole! Would you shut Camilla out too? Tell us your thoughts in the comments below!