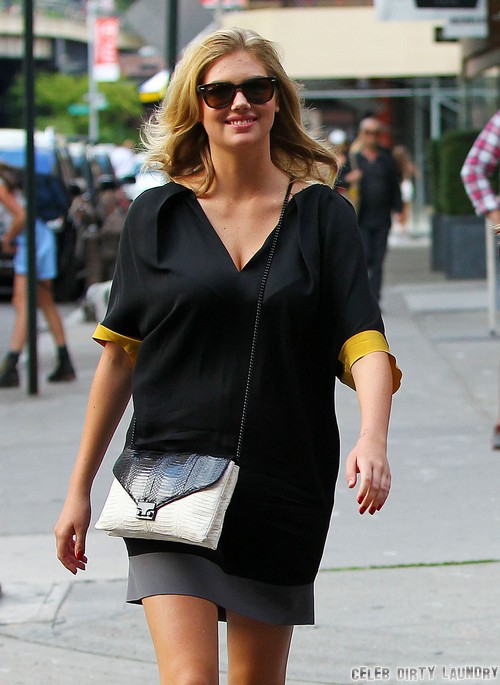 Kate Upton and Dancing With the Stars regular Maksim Chmerkovskiy were rumored to be dating a couple of months back, and Kate never denied the rumors, simply stating that she’s just having ‘fun’. However, there are now rumors stating that Kate could be pregnant after she was spotted at a party turning down alcohol, and because she has shied away from any revealing shoots lately.

Of course, her refusal to do any more lingerie shoots – at least for now – could also be her attempt to shake up her image. Kate’s actually a lot smarter than people give her credit for, and she’s previously that she understands that her image right now is built on her sex appeal. However, she had also stated that she wants to be able to change that, and now that she’s established herself in the industry and made a few contacts, she’s going to try and change up her image a bit.

However, that doesn’t necessarily explain the rumors of a baby bump, which supposed eyewitnesses claimed they saw when Kate made appearances at an all-white party on Sunday and then a VMA party later. Guests claimed that she seemed like she put on a bit of weight, and that she was avoiding alcohol at all costs. However, other sources also laughed off the rumors, stating that she was simply being careful about calories and that there was no way Maksim was going to be become a father.

What do you guys think? For what it’s worth, I think Kate would be extremely careful about not getting pregnant right now, as horrible as that sounds. Usually, models usually get pregnant once they’ve established themselves and know they can take some time off, a la Gisele Bundchen and Miranda Kerr. Kate is not even remotely close to that level right now, and getting pregnant would slow down the momentum she’s managed to build for herself. But I think she already knows all this, so I doubt she is pregnant.