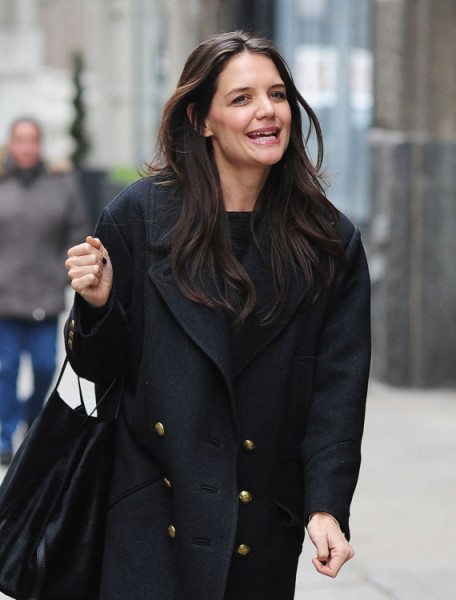 So the former Mrs. Tom Cruise is single and mingling… with Hollywood executives during the Oscars. Katie Holmes was spotted out on a whirlwind 24-hour trip to LA. She turned up at the ICM Partners party (her news agency ever since she left CAA last month) and her presence definitely wasn’t lost on the others there.

“It was like Katie’s return to Hollywood,” a spy told Page Six. I hope she made an impression. She’s already back to Suri Cruise in NYC as we speak.

You’ve got to give the girl credit for trying. Ever since her fashion show went MIA and her Broadway play was axed, Katie Holmes has been on the hustle. Good for her. I’m not saying she’s the next Meryl Streep or anything but she could easily star in another TV show. People would kill to have their own Homeland like Claire Danes right now.

Lainey Gossip pointed out that this time last year Katie and Tom attended the Vanity Fair party after the Oscars. It was one of their last public appearances together. Tom usually likes attending Oscar things because it tends to make him feel like big man on campus. Did she tell him to stay away this week so she could meet and greet without the drama? Do you think they still have that kind of contact? Their people must because Katie wouldn’t risk being at the same Oscar party as him, right? Does that make Tom less of a scurvy douche to you if he stays out of Hollywood to let Katie rebuild her career or is he probably just over the whole thing. He’s currently filming in London. That’s a shit flight to make. But the last thing I’ll ever think about Tom is that he’s over anything. He seems like an obsessor to me. Still, Katie was only in LA for one day. It’s not like he gave her the whole Oscar weekend, not like she couldn’t have used it. Why couldn’t she pull an Oscar appearance? Could you imagine? Katie stuns the world and leaves Tom and then six months later she’s announcing the winner for Best Cinematography! You’d have to bow down to that.

Is Katie Holmes’ ICM Partners party appearance a good sign that she’s ready to start working full-time again? Do you think she has the acting chops to make it in a post-Tom Cruise world?