Tom Cruise Trying To Steal Suri Cruise Away Again While Katie Holmes Is At Her Lowest? 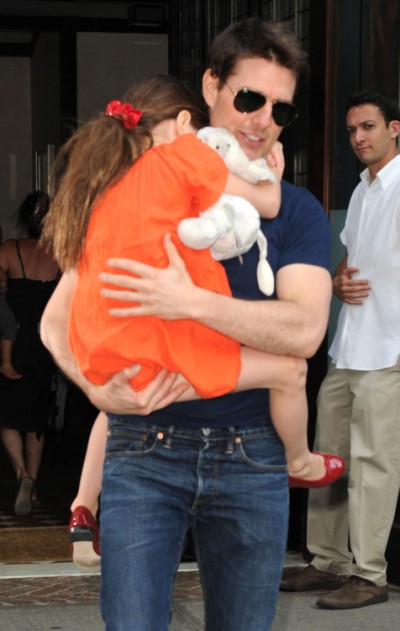 I feel like I haven’t written about Tom Cruise and his evil never-ending plans to steal Suri Cruise away from Katie Holmes in forever. I can’t help but feel the timing is a little interesting on this new one. Apparently Tom is seriously considering shelling out for a $25 million estate in Hawaii. He’s all about it because it’s the kind of place that Suri would “never want to leave”. Naturally, Katie is supposed to be beside herself over the whole thing because she’s afraid Suri could stay in that little piece of heaven for weeks and months.

Let’s go ahead and call bullshit on this for two reasons. The first is that there are always these stories that Tom is buying whole cities to woo Suri away from her mom. Wasn’t he looking at a huge compound in New York so Suri could ride horses or something equally as stupid? It always comes to nothing in the end. And second, doesn’t Tom have to actually see Suri for her to visit him? I know “Suri Watch” died when Tom saw his kid over the holidays but has he seen her since? I’m not too sure. Should we start a Suri Watch 2.0? It’s been over a month since Christmas… just saying. So these claims by the National Enquirer aren’t fooling me today.

HOWEVER, way to kick Katie Holmes when she’s hurting. Lainey Gossip had a great post yesterday on how, for the first time since her heroic divorce, Katie Holmes is down and out. She rode a massive high for awhile. She could do no wrong. But just as news hit that her Broadway play, Dead Accounts, was closing early due to lack of ticket sales, we find out that her fashion line, Holmes & Yang, will not be returning to NY Fashion Week next month. That’s a double kick in the crotch for sure. She’s got to be feeling pretty raw. So, it could be just about the right time for Tom to come in and work his voodoo on that poor child by taking her to Hawaii. Tom Cruise would never to do that! Oh, wouldn’t he? He thought he could run for president! This biotch thinks he can do ANYTHING!

What do you make of the Tom Cruise/Lanai purchase? Would he buy it to get Suri away from her mom during a weak point in her life or have we all learned not to underestimate Katie Holmes? She is crafty, that one is.